A man views Jeff Koons' sculpture "Play-Doh 1994-2014" during the opening of the Newport Street Gallery's new exhibition, "Jeff Koons: Now" in London, UK on May 17, 2016.
Anthony Devlin—PA Wire/AP
Ideas
By Alex Melamid
Melamid is an artist and the founder of Artenol magazine.

After the shock of waking up last November and realizing that our president is Donald Trump, liberals and intellectuals tried to figure out whom to blame. We pointed to the dumbing-down of American voters, to the Republican Party that pandered to their baser instincts, to the Koch Brothers and other right-wing patrons of the war on truth. But it is the progressive class — the people, as we flatter ourselves, of enlightenment and education — who are to blame no less than them. Trump is the perfect avatar of the culture we created.

In 1968, the year that our new President graduated from the University of Pennsylvania, a revolution took place in Western culture. A radical student movement against authoritarianism and war was born that year in Western Europe. The hippies were putting down roots in San Francisco. A political idealism had taken hold among a generation of young people fed up with the strictures of an outdated morality. But it was also a cultural moment in which strange new principles of amorality took hold.

The visual arts led the way. Andy Warhol became the era’s artistic god. He summed up his own philosophy this way: “Making money is art…and good business is the best art.” He also shamelessly admitted to a predilection for PR that would sound familiar to any student of Trump’s political biography: “Publicity is like eating peanuts,” said Warhol. “Once you start, you can’t stop.” In some ways, the founder of Pop Art was merely echoing the famous adage of Pablo Picasso: “Good artists copy; great artists steal.” I remember how charming my friends in the art world found this at the time. Charming and, more importantly, liberating. Even if the stated maxims of both Warhol and Picasso were tinged with irony, we found them liberating and repeated them ecstatically: Stealing was not as bad as our parents made it out to be! We could steal and, at the same time, be original!

Since then, plagiarism in the arts has mutated into what’s now called appropriation, a term stripped of any negative judgment. Few artists of my generation would question the notion that appropriation is a path to great art. In our youth, it all seemed like an entertaining diversion from the rigid moral codes of our elders. The older generation assumed that our unruliness had only to do with our age — They will grow up, they said. But like Oskar, the protagonist in Gunter Grass’s The Tin Drum, a book we were all reading at the time, we didn’t want to grow up. We wanted to stay young. And we did!

Like Trump, we wanted to behave like unruly children forever. As the acclaimed novelist Dave Eggers wrote of Trump last December in The Guardian: “We must…agree that this president has the bearing and impulses of a nine-year-old boy — a troubled nine-year-old boy. He wants most to be liked and admired, and when he isn’t, he lashes out with insults and aggrieved demands for apologies. He has no patience and little self-control. He cannot spell and does not read. He is our new president.”

Trump has a child-like narcissism, a Warholian appetite for publicity —characteristics that have long been associated with avant-garde artists like myself. When Sarah Palin noted that, “Everything about Donald Trump’s campaign, it’s avant-garde” — she was overstating his originality.

In the arts, infantilism has been an end in itself for generations. The pioneering poet and performance artist Tristan Tzara wrote in 1936 that his movement, Dada, “was born of a revolt that was shared by all adolescents.” Picasso made a similar boast about his artistic progress: “It took me four years to paint like Raphael, but a lifetime to paint like a child.”

Recent artists have taken the idea further. Jeff Koons’ “Play-Doh,” a gigantic sculptured pile of the familiar childhood substance, has been dignified by the New York Times’ Roberta Smith as an “almost certain masterpiece.” (Koons also just released a new sculpture in Rockefeller Center; it is a balloon.) Cy Twombly’s pieces look as if they were made by a four-year-old; Howard Hodgkin’s are hardly more sophisticated. Looking at the work of Warhol’s protégé Jean-Michel Basquiat, hailed by many as the greatest artist of the last fifty years, one might be forgiven for assuming it’s the product of a disturbed nine-year-old — and a lot of parents will tell you that nine is a bad age, destructive and freewheeling, in a peculiarly American sense.

When I arrived in New York from the Soviet Union in 1978, the first movie I was taken to see was the newly released Superman. I came out stupefied. Was this aimed at children? Or at some different breed of adults? The audience was filled with both, and all were delighted. It turns out the film was ahead of its time.

The critic A.O. Scott wrote a couple of years ago that, over the past fifteen years, movie studios have committed their resources to creating franchises “that advance an essentially juvenile vision of the world.” He continued: “Comic-book movies, family-friendly animated adventures, tales of adolescent heroism and comedies of arrested development do not only make up the commercial center of twenty-first-century Hollywood. They are at its artistic heart.” Hollywood, in that sense, has caught up with the avant-garde. Our political life was destined to follow, propelled by a social law that was most succinctly defined by Andrew Breitbart, the founder and namesake of Trump’s most loyal news outlet: “Politics lies downstream of culture.”

He was right. Whatever the intelligentsia nurtures and celebrates in our galleries and academic journals is bound to flow eventually into the nation’s cinemas, through its ballot boxes and toward the swamp of Washington, D.C. The last few months have proven that Trump is not out to drain that swamp. He is its progeny, and we on the left — the artists, the people of culture — have done our part in creating the conditions for him to thrive. 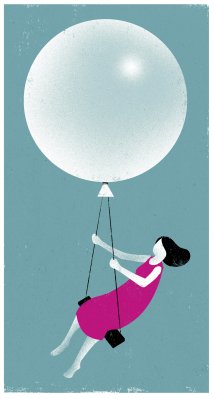 Whose Privilege Is Showing? Probably Mine. But Don't Ask Me to Check Anyone Else
Next Up: Editor's Pick