TIME met up with Game of Thrones star Kit Harington in Belfast on an unexpected break from filming season seven, as inclement weather had prevented his planned shoot. It was a pause in action for an actor who’s been a part of some of Thrones’s most demanding sequences. “It’s a different way of acting where it can get very frustrating, but you have to zone off the background noise a bit,” he notes.

Over coffee before he caught a screening of Manchester by the Sea, the actor described the process of disillusionment — and rediscovery — that he’s experienced. After a tough time with the continued attention that comes with the show’s success, Harington’s found excitement in the role once again: “I deal with a lot better now. I think I deal with it better because I can see the end.”

Harington spoke to TIME in January for our cover story on Game of Thrones, whose seventh season premieres July 16; here’s an edited transcript of that conversation.

In major scenes you’re surrounded by hundreds of extras, practical special effects and spots where they’re going to paint in visual effects. Where do you find the spontaneity you need for a performance?

The challenge with Thrones is that unlike some of the smaller, maybe independent movies, where it’s a single camera and it’s in a room, and it’s very domestic — it’s far more actor- and performance-focused. With this, in the nicest and best possible way, you are one part of the scenery in various shots. You have to sometimes go into a zone with Thrones where you just shut off everything around you, because everything has to be so detailed. The background has to be in exactly the right place, the smoke has to be the right level, the light has to be right — there’s a hundred things that have to be right. At any one moment, the take could not work, because of any of those elements. It’s exactly like shooting Lord of the Rings. Any big, epic movie would be like that. And it’s a different way of acting where it can get very frustrating, but you have to zone out the background noise a bit. And there are times when you don’t, when it’s a less intense scene or something. It’s a certain skill, and one that I’m glad I’ve had the opportunity to try and craft, because some actors come into this and it’s way too much going on and they can’t zone out.

Kit Harington in season 1 of 'Game of Thrones.'
HBO

To me, the show’s chaos and power struggles seem more resonant with the present political situation than it might have, say, even two years ago.

I disagree with you slightly — when this show [began production] it was 2008, 2009 — right after the financial crash. Everyone was worried about their financial situations, and it was a period of real instability. And then you have this fantasy show and I think it came along at the right time, and felt like the right thing at that time, for people to just get away from their lives and invest in this fantasy world that brought some reality that they could attach their own lives to. And then there was this period of stability where things kind of ironed out. And as it’s ending, I find it fascinating — maybe these things come around in eight-year cycles — the world, in my view, seems to be shifting again, breaking apart. There is a lot of chaos in the world right now, whether it’s implemented by our government, purposeful chaos or not. It’s interesting being in a TV show that is not reflecting the world, but at the same time is.

The one irony I found this year, it was a very sad irony: We went to Iceland to find snow, because winter is here. We got there and we were lucky to get the snow we did, because in our world, winter is definitely not here. It’s this weird parallel the opposite parallel. We go out there this year, and the glacier that me and Rose [Leslie] filmed on four years ago, I saw it and it has shrunk. I saw climate change and global warming with my own eyes, and it is terrifying.

There may be an escapist element to the show, but what you’re saying rings true: There’s climate change in Westeros, too, it just goes in the other direction.

And also, until very recently, the big power players in Westeros were far more Machiavellian than our big power players. Unfortunately, until recently. Now, Westeros maybe feels like a nice escapism compared to what you’re seeing on the news, because the world’s politics has gotten very, very dark in recent weeks and months.

Jon Snow was a literary character part of whose story arc existed long before the show was written or you were cast. But do you think your performance has changed his trajectory at all?

I think I was picked to be Jon Snow because there’s quite a lot of me in Jon Snow. When I read it on the paper, I knew there was something in it like me. I’ve spoken to David and Dan and they said that when I came in and read, the feeling in the room was that I was that part and that part was me. How they envisioned Jon Snow — they found, hopefully the right person for it. How I’ve shaped him over the years, I always felt it was going to be a long journey, it was always going to be eight years in my mind. So you want that character to learn and learn and learn, and then develop. I’m really happy this year, and I hope it comes across.

I didn’t think about it really, really long-term — you take every scene as it comes. But there were times early on where I felt what I was doing with the character was wrong. I made mistakes and felt that he wasn’t interesting enough. That sounds weird, but I’ve never been quite content with him. Maybe that’s what makes him him. That angst. He could be a bit too morose, he didn’t quite go there emotionally. But once you’ve made those choices, that character is that character. You just look like an actor wanting to change the character if you then go back and betray what your first instincts were. So I’m more happy with Jon than I’ve ever been before. This year there is this huge seismic shift where all of what he’s learned over the years, suddenly… He’s still the same Jon, but he grows up.

In the past, he’s been frustrated, and he may by the same token be frustrating [to play].

He definitely is frustrating.

Kit Harington in season 5 of 'Game of Thrones.'
HBO

Is the level of fan scrutiny the show invites a challenge for you?

I think it was — I take it season by season — [the show] really took off in season 2 or 3, and it was so exciting, this show really getting this massive amount of global attention towards it. I struggled with that around season 5. I suddenly found it quite hard, its not stopping. The initial excitement of it wore off. I deal with a lot better now. I think I deal with it better because I can see the end. And I have to be honest with myself: I don’t know the next time I’ll ever be involved in something like this. I’ve taken for granted the idea that I can go to the SAG Awards and the Emmys and the Golden Globes each year. This year, I’m like, I can’t. [Harington skipped the Screen Actors Guild Awards, two days after this interview, for work commitments.] When is the next time you will enter this hallowed rooms? And that’s amazing, that I get to take that for granted. The enjoyment of it, the desperate trying to enjoy it while it’s here, is helping with the inevitable slight pressure of it.

What is it like to not know how it’s going to end?

I had certain theories and things up until this last year, so many theories. As a group of people, we do theorize a lot; long hours in the green room. I am so excited to receive next year’s scripts, because I genuinely have no idea. [For my performance,] I shouldn’t be trying to endgame. He doesn’t know the end, I don’t know the end — he’s living it bit by bit. But I can’t wait to read it. I feel like it’s going to be one of those things where they get us into a room to read them, so there’s no leakage.

MORE: We Analyzed Every Second of the New Game of Thrones Season 7 Trailer

How have you seen the production change over time?

It’s evolved, and it creeps up on you. In the Paint Hall [the Belfast studios where Game of Thrones is filmed], I remember the first year, there was just a few trailers outside it, and there wasn’t that second studio. I go there now, and I said to Dan Weiss once, when we were having a beer in Iceland, “Don’t you just want to go in one evening after everyone’s left and switch the lights on and just walk around that place yourself and think ‘I did this’?” They’ve created this studio, and this incredible infrastructure — and yet, honestly, I know it sounds like I’m being too nice, but there’s a real sense of family. Someone who worked on a similar franchise said to me this is the nicest thing he’s worked on because of the sense of family. Everyone comes back having the same moans and complaints, but everyone loves each other. And for all of its massiveness, I’m going to really miss coming back to this family every year and saying hello to the same people. That’s the nice thing about a caring big franchise: It can feel like a monster, but when it’s done right, it feels — for a moment, just for a second — like you might be in a normal job, a normal office.

Is it hard to fathom that the show’s end is in sight?

I think we’ve all tried to come to terms with that this year. I sound like someone’s dying, but it does feel like someone’s dying. We won’t have time to say goodbye to it, emotionally. For all of us, it’s been an emotional thing in our lives—it’s been all of my twenties. I’m trying to say a quiet goodbye to it this year, so next year I can just do my job and get the f–k out. 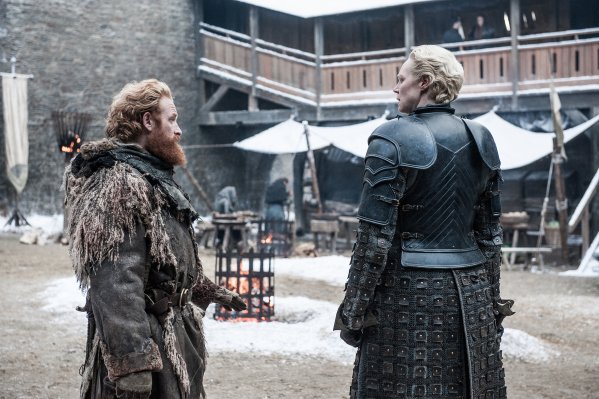 Here Are 10 Intense New Photos From Game of Thrones Season 7
Next Up: Editor's Pick