“Today President Donald J. Trump informed FBI Director James Comey that he has been terminated and removed from office,” Press Secretary Sean Spicer said in a statement. The decision was based on recommendations from the top ranking officials in the Justice Department, Attorney General Jeff Sessions and Deputy Attorney General Rod Rosenstein.

This is only the second time in American history that an FBI Director has been fired by a sitting President. In 1993, Bill Clinton fired William Sessions following allegations from the Department of Justice that he had abused his power in office.

The recommendation from Rosenstein, titled “Restoring Public Confidence in the FBI” centered on Comey’s decision not to charge former Secretary of State Hillary Clinton for her use of a private email server, arguing that he exceeded the limits of his authority by bypassing then-Attorney General Loretta Lynch. “I cannot defend the Director’s handling of the conclusion of the investigation of Secretary Clinton’s emails, and I do not understand his refusal to accept the nearly universal judgement that he was mistaken,” Rosenstein wrote Tuesday.

At most, Rosenstein argued, Comey should have said the FBI completed its investigation and handed it over to federal prosecutors. “The FBI Director is never empowered to supplant federal prosecutors and assume command of the Justice Department,” he wrote.

Trump agreed with this assessment, according to a copy of the letter he sent Comey, concurring that Comey was unable to “effectively lead the bureau.”

“It is essential that we find new leadership for the FBI that restores public trust and confidence in its vital law enforcement mission,” Trump wrote.

Trump’s former longtime security guard and current Director of Oval Office Operations Keith Schiller hand-delivered notification of termination to the FBI headquarters on Tuesday, according to an administration official.

The statement came shortly after the FBI acknowledged to the Senate Judiciary committee that Comey had misspoken during his testimony last week about Clinton aide Huma Abedin forwarding thousands of emails to her husband, former Congressman Anthony Weiner.

“There were thousands of Secretary Clinton’ s emails on that device, [Weiner’s laptop] including what they thought might be the missing emails from her first three months as Secretary of State,” Comey said last Wednesday. “If there was evidence she was acting of bad intent, that’s where it would be.”

White House Press Secretary Sean Spicer insisted on Tuesday evening that plans to fire Comey had not been in the works for a long time, and that Trump was simply acting on the recommendations from the Justice Department.

But the FBI sent a letter to the Senate Judiciary “supplementing” the testimony, explaining that most of the emails were backed up on the computer, not forwarded by Abedin.

Although White House Press Secretary Sean Spicer insisted on Tuesday evening that plans to fire Comey had not been in the works for a long time, the decision garnered controversy, with people on both sides of the aisle questioning the political motives behind the decision, particularly in relation to the Russia investigation.

While Trump wrote in his note to Comey that he was appreciative of him informing him three times that he was not under investigation, Comey testified in March that the FBI was investigating possible ties between associates of the the Trump campaign and Russia during the 2016 election.

Trump’s decision to fire Comey means that the bureau is conducting an investigation without a permanent head. Andrew McCabe, the former deputy director of the agency, will take Comey’s place for the time being. Although the White House said a search for a new director will begin “immediately,” Trump now has the jurisdiction to appoint who he chooses, which will inevitably raise the question of partisanship in what is technically supposed to be a nonpartisan position.

As a result, calls for an independent prosecutor into this investigation, which had already been circulating immediately increased, mostly from Democrats but also from some Republicans.

“FBI director must be a career professional. An independent prosecutor is needed for Trump-Russia now,” tweeted Richard W. Painter, who served as an ethics lawyer for George W. Bush.

Although Senator Richard Burr, who is Chairman of the Senate Intelligence Committee, which is conducting its own investigation into Russian meddling in the 2016 election, stopped short of calling for an independent prosecutor, he said he was “troubled” by the timing of the dismissal and called it a loss for the bureau.

“His dismissal further confuses an already difficult investigation by the Committee,” Burr said.

“I don’t think it effects it at all in any capacity whatsoever,” she said of the investigation. “The process continues, both I believe, in the house and Senate committees. I don’t see any change or disruption there.”

But, she continue, the bigger point was the rationale for the investigation itself. “When are they gonna let that go?” Sanders asked rhetorically on Fox News. “Its been going on for nearly a year. Frankly, its kind of getting absurd. There’s nothing there.”

With reporting from Zeke J. Miller 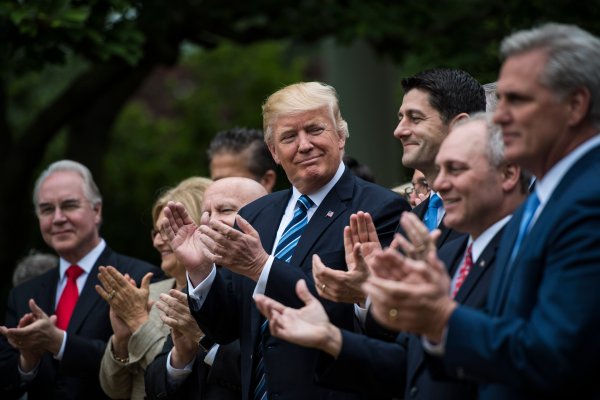 All the Democrats in the Senate Just Asked for a Fresh Start on Health Care Bill
Next Up: Editor's Pick