President Trump will travel to the seats of the world’s three major monotheistic faiths on his first foreign trip, the White House announced Thursday.

The visits to Saudi Arabia, Israel, and the Vatican will take place during the fourth week of May, before Trump’s previously announced trip to meet with NATO allies in Brussels and G-7 leaders in Sicily. Senior Administration officials previewed the trip for reporters Thursday, saying the symbolic visit marks an effort to reset relations with the faith community and to “seize the opportunity” presented by the rise of the Islamic State to develop closer ties with Middle Eastern allies.

Saudi Arabia was the driver of the visit there, the officials said, with King Salman bin Abd Al-Aziz inviting regional Muslim leaders to meet with the president. Trump hopes to use the meeting to obtain a “long term fix for radicalization” in the Muslim world, as well as to work to cut off funding for terror groups and to increase burden sharing in the fight against ISIS.

The Israel visit, which will include meetings with Israeli leaders President Reuven Rivlin and Prime Minister Benjamin Netanyahu, and Palestinian President Mahmoud Abbas, comes as the Trump Administration has thrown itself at the issue of Middle East peace. Trump has designated his son-in-law Jared Kushner to oversee the effort along with top White House aide and former Trump Organization attorney, Jason Greenblatt.

Trump’s visit to Rome will mark the first time he and Pope Francis have spoken. The Pope has been deeply critical of Trump’s campaign rhetoric in the past.

The senior Administration officials cast the trip as a shift in Trump’s foreign policy, away from the calculating isolationism Trump called for in his campaign toward a more internationalist view. The official said the trip “demonstrates that the president is willing to and has embraced his leadership role in multinational forums when they serve the interests of the American people and American security,” a second official said.

“I think what the president has demonstrated already and will be able to demonstrate further on this trip is that ‘America First’ is fully compatible with American leadership in the world,” the official said. “What this trip will also do is reverse what had been a trend, I think, of America’s disengagement from the world and some of its biggest problems.”

“I think contrary to what has been the conventional wisdom associated with the president’s approach to alliances, the president has actually done a tremendous amount of work to strengthen alliances,” the official added.

The administration did not immediately announce the cities and dates for Trump’s visits. 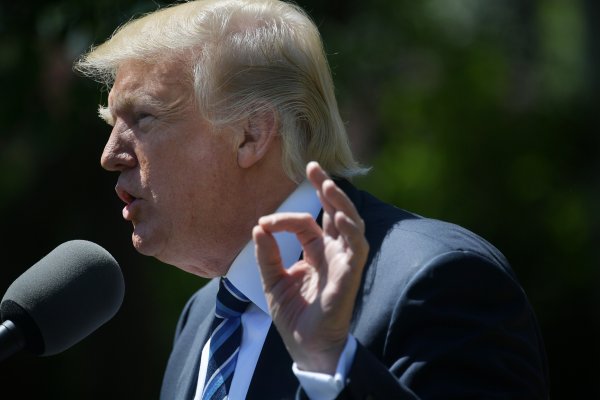 Trump and Clinton Knock Heads
Next Up: Editor's Pick