President Trump plans to sign an executive order Thursday in conjunction with the National Day of Prayer to relax prohibitions on political activities by religious organizations, White House officials and stakeholders said.

Two Administration officials said the order will primarily pertain to the Johnson Amendment, a 1954 provision in U.S. tax code that prohibits political activities by 501(c)3 tax exempt organizations like churches. Conservative religious groups have long sought the repeal of the provision, a position embraced by Trump on the campaign trail. But the prohibition was put in place by Congress, potentially limiting the impact of Trump’s executive action to more of a symbolic move. A White House official says the order directs the Internal Revenue Service to exercise “maximum enforcement discretion” in cases related to the Johnson Amendment, but that “all laws still apply.”

An Administration official added that the order would take steps to free religious groups like church-affiliated hospitals, universities, and non-profits from requirements that employees receive contraception coverage in their health insurance plans. The requirement was the subject of a Supreme Court case brought by the Little Sisters of the Poor. A White House official said the order would provide “regulatory relief” broadly, but that it would not state the specifics.

Activist groups jumped to praise or protest the upcoming executive order on Tuesday, when news leaked that it would be related to religious freedom. The response came in large part not to Thursday’s order but to drafts of a possible executive order that was discussed in February, that proposed broad language that many argued could have allowed religious groups and federal contractors to discriminate against LGBT individuals when hiring. That draft also would have allowed groups with religious leanings, from churches to some private companies, to deny contraceptives as part of their health insurance options for employees.

Administration officials said drafts have included religious freedom language, but said it will not roll back an Obama-era order providing for protections for LGBT workers employed by federal contractors. Because federal law offers few protections for gays and lesbians at work or home, supporters argue that religious freedom language would change little for those Americans. Opponents say that depends on the interpretation and the scope.

Social conservative leaders united around the repeal of the Johnson amendment last summer after Trump fractured their base in the primaries and leaders sought new ways to shift the election’s focus from personality to policy.

Family Research Council president Tony Perkins pushed to make the repeal of the Johnson Amendment a part of the GOP’s platform at last summer’s Republican National Convention in Cleveland. Trump supporter Jerry Falwell Jr., president of Liberty University, long opposed the rule, after the Americans United for the Separation of Church and State came after him in 2008 when he endorsed Mike Huckabee for president. Franklin Graham wrote to President Obama in 2013 to complain about IRS investigations into his organizations, Samaritan’s Purse and the Billy Graham Evangelistic Association.

The breadth of the Thursday executive order is not clear. Many groups, including the religious liberty law firm Becket, the Susan B. Anthony List and Concerned Women for America, had not seen the language as of Wednesday afternoon. White House officials said the order had not yet been finalized. 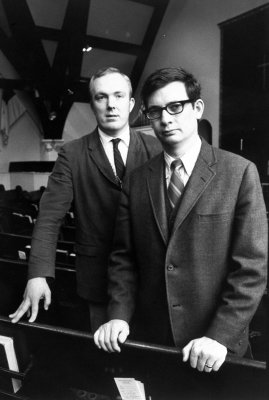 The Surprising Role of Clergy in the Abortion Fight Before Roe v. Wade
Next Up: Editor's Pick