President Donald Trump abruptly ended an interview with CBS after John Dickerson pressed him on his claims that former President Obama wiretapped him.

Trump gave the interview Saturday to mark his first 100 days in office, and CBS ran the it on Monday. Trump brought up his widely-refuted March claims that Obama wiretapped him when Dickerson asked if Obama gave him any helpful advice, according to the CBS footage and transcript.

When Dickerson pressed him on what he meant, Trump told him, “You can figure that out yourself.”

Trump appeared reluctant to continue discussing the surveillance allegations he had resurfaced moments before. Dickerson pressed on about the wiretapping claims, asking Trump if he stood by them.

“I don’t stand by anything,” Trump replied. “I just — you can take it the way you want. I think our side’s been proven very strongly. And everybody’s talking about it. And frankly it should be discussed. I think that is a very big surveillance of our citizens. I think it’s a very big topic. And it’s a topic that should be number one. And we should find out what the hell is going on.”

After a few more exchanges, Trump ended the interview by saying “Okay, it’s enough.” He then sat down at his desk and looked at the lone paper on top of it while the camera continued to film. 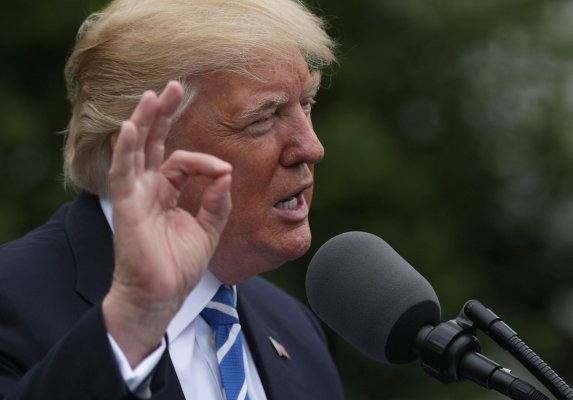 Trump Considering Breaking Up Big Banks
Next Up: Editor's Pick