President Trump speaks at the Department of Veterans Affairs before signing an Executive Order on April 27, 2017 in Washington, DC.
Pool/Getty Images
By Joseph Hincks

At 44%, Trump’s approval ratings at the 100-days mark are the lowest of any newly-elected President on record, according to a recent survey. Nevertheless, Trump supporters remain firmly planted behind their man.

At least those are the indications of a University of Virginia Center of Politics poll released Thursday, which show that 93% of Trump voters surveyed approve of the job he is doing compared to only 7% who do not, Politico reports.

Those results — which have a margin of error of ±3.1 percentage points — are drawn from a national survey of 1,000 self-declared Trump voters interviewed between April 17 and April 19, as well as from eight focus groups conducted in Pittsburgh, Columbus, Canton, Oak Creek and Houston earlier in April.

“Trump voters are extraordinarily loyal and supportive of the guy they voted for last November,” Republican pollster Glen Bolger, who conducted the poll and focus groups, summarized for Politico. “All the controversy, all the stuff you read in media about how it’s chaotic, how they don’t have their act together — they don’t see it.”

“He said he was going to do something, and he took immediate action, not, you know, ‘We’re going to go transition and everything,’” said one male Trump supporter interviewed in Pittsburgh.

The survey also found that the overwhelming majority of respondents were deeply skeptical of the media: Trump’s assertion that the news media are “the enemy of the American people” was backed by 88% of them. 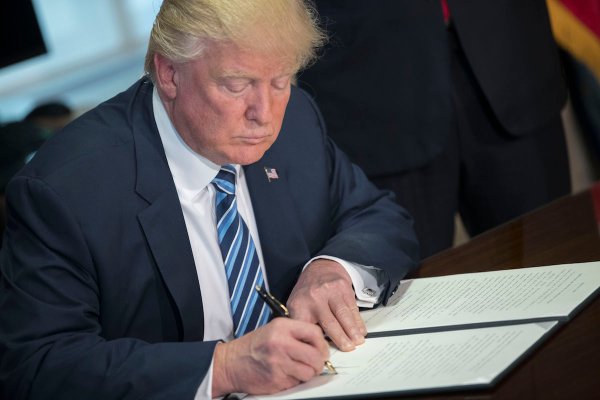 Here Are President Trump's 3 Biggest Achievements in His First 100 Days
Next Up: Editor's Pick