Since joining Twitter in March of 2009, Donald Trump has fired off nearly 35,000 tweets ranging from provocative jabs at Democrats to his thoughts on Diet Coke.

But 10 of those tweets stand above the rest for receiving the most retweets.

The most popular tweets show a stark divide between statements—both positive and negative—that his supporters loved and old remarks that his critics recirculated to embarrass or criticize him.

Below are Trump’s most retweeted tweets of all time, according to data provided by Twitter.

2. Trump’s first message as President-elect, which echoed his victory speech about the economically neglected, was also shared widely.

3. An old tweet about President Obama’s divisive deal to return Sgt. Bowe Bergdahl to the U.S. in exchange for the release of Afghan terror suspects detained at Guanatamo Bay was recirculated by critics during Trump’s first week in office and whenever the Administration ran into trouble.

4. A snarky line about his Democratic rival during the 2016 campaign was also popular.

5. Trump’s frustration when then-Republican presidential nominee Mitt Romney was about to lose the election in 2012 took on a new life when his detractors happily deployed this missive to target Trump—who lost the popular vote by nearly 3 million votes—when he was sworn in on January 20.

6. Another perennial old tweet was one of many holiday-timed bones he has tossed out to “haters and losers.”

7. This Obama-era tweet was one of Trump’s routine criticisms of the potential for American military involvement in Syria, which his critics recirculated when the Trump Administration launched Tomahawk missiles at a Syrian airfield on April 6. 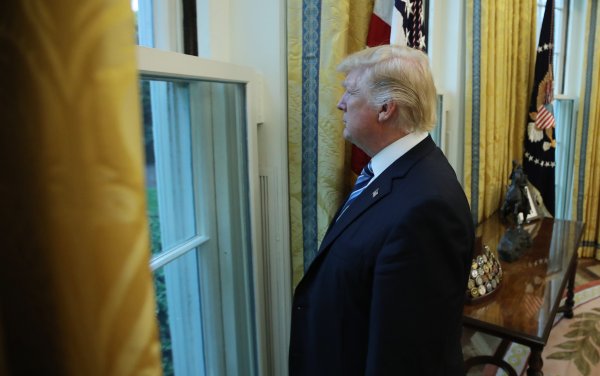 Trump Says He Thought Being President 'Would Be Easier'
Next Up: Editor's Pick