Will Republicans Finally Repeal Obamacare? It's Up To Moderates Now

For weeks, arch-conservative members of the House Freedom Caucus shouldered the blame for the collapse of the Obamacare repeal.

Lawmakers blasted the conservatives in interviews with reporters in the halls of the Capitol, glared at them in meetings, and lamented the breakdown of order. President Trump tweeted at them, attacking them for opposing the bill in favor of a more conservative product.

“The Freedom Caucus will hurt the entire Republican agenda if they don’t get on the team, & fast. We must fight them, & Dems, in 2018!” Trump tweeted on March 30.

Now the script has flipped.

After moderate Rep. Tom MacArthur of New Jersey proposed an amendment to satisfy conservatives, the Freedom Caucus announced on Wednesday it would support the bill. The spotlight has now shifted to moderates in the House of Representatives who are still opposed or wavering on whether to support the health care reform bill.

At issue is whether moderates Republicans — already loathe to support an Obamacare repeal that would increase the number of uninsured by 24 million — can vote for an unpopular bill many view as even more conservative than before.

If the new Obamacare repeal effort fails, it’ll be moderate Republicans who could face the blame — or the applause.

“Unfortunately the pressure has shifted, it appears,” said Rep. Chris Collins, a moderate from New York. “I’m not happy with it, but life’s not always fair.”

The new amendment was negotiated between Rep. Mark Meadows, the chair of the conservative House Freedom Caucus, and MacArthur, who is a a co-chair of the moderate House Tuesday Group.

The amendment would allow states to opt out of federal mandates that insurers charge the same rates for people the same age, meaning that insurance companies could charge higher rates to sick people than healthy people. Critics of the effort say this undermines a core tenet of Obamacare that requires insurers to cover those with preexisting conditions.

The amendment would also allow states to opt out of requiring insurers to cover “essential health benefits,” which include mental health, emergency services, maternity care and other measures. States would have to meet certain requirements to opt out, and prove that their own plans would reduce premiums, increase choice of health plans or boost coverage.

The bill contains many of the other measures that moderates chafed against: defunding Planned Parenthood, rolling back the Medicaid expansion and allowing insurers to charge higher prices on the elderly.

While the amendment has brought on board most of the Freedom Caucus, it does not appear to have swayed any moderates who had previously opposed it. And it may even deter some moderates who had supported it in the last round.

“I’m still a no,” said Rep. Dan Donovan of New York, who opposed the bill last month. “The things I needed addressed in the replacement plan and that affect the people of the 11th Congressional District aren’t addressed by the amendment.”

“I haven’t read the full text, but I’m not on board with it,” said Rep. LoBiondo of New Jersey who opposed the bill earlier.

Others, including Rep. Carlos Curbelo of Florida, a moderate who supported the earlier incarnation of the bill, and Rep. Patrick Meehan of Pennsylvania, who voted for the bill in committee in March, would not say on Wednesday whether they supported the new version of the bill.

If Republicans lose some moderate votes because of the amendment, it could fail in the House. Republican leaders in the House or whipping up votes but have said they won’t bring the bill to the floor unless they can be sure they have the votes to pass it.

“Every time you move something, this is a balancing act,” Donovan said. “You have to make sure when you’re gaining three votes I’m not losing two here or three there. So it’s a difficult task to balance.”

Raising the stakes for Republicans is the increasing unpopularity of their effort. More Americans than ever view Obamacare favorably. Large majorities — 8 in 10 Democrats, 7 in 10 independents, and even a small majority of Republicans — say that there should continue to be national mandates that block insurers from charging more or denying coverage to customers with medical conditions, rather than allowing states to opt out, according to a Washington Post/ABC poll.

A plurality of voters (43%) want to see President Trump work with Democrats to change the law, rather than with conservative Republicans (26%). The new version of the bill is not expected to garner any Democratic votes.

MacArthur, a second-term Congressman, negotiated with the conservative Freedom Caucus without the blessing of the moderate Tuesday Group, which he co-chairs. Tuesday Group members had said they did not want one of their co-chairs negotiating on their behalf and wanted the bill to be worked through the appropriate committees, Ways and Means and Commerce.

MacArthur’s move to negotiate the bill means that he may ultimately force his own moderate allies to bear the responsibility of passing the bill.

Rep. Charlie Dent, another co-chair of the Tuesday Group, accused the Freedom Caucus of “blame-shifting” by supporting the bill.

“My sense is that those who are opposed to the bill are not going to change their votes over this,” he said. Dent suggested that MacArthur acted without support from Tuesday Group members. “Tuesday Group [members] made very clear to me they didn’t want anybody else negotiating” on their behalf, he added.

The Freedom Caucus conceded in a statement that the bill did not “fully” repeal Obamacare but said they would support it anyway. “While the revised version still does not fully repeal Obamacare, we are prepared to support it to keep our promise to the American people to lower healthcare costs,” the group said. “We look forward to working with our Senate colleagues to improve the bill. Our work will continue until we fully repeal Obamacare.”

Now as Republicans tally the votes and with the Freedom Caucus on board, all eyes are on the moderates.

“There’s pressure on everybody here,” said Rep. Tom Cole of Oklahoma. “They’re all worried that people will pick up something that will never become law and use it as the basis of an ad against you.”

Collins, the Tuesday Group member, said his own moderate caucus won’t face the heat that Freedom Caucus members faced three weeks ago. He argued that it was the Freedom Caucus that had pulled the bill far to the right.

“They won’t face the same the wrath because we all know where it came from to begin with,” Collins said. 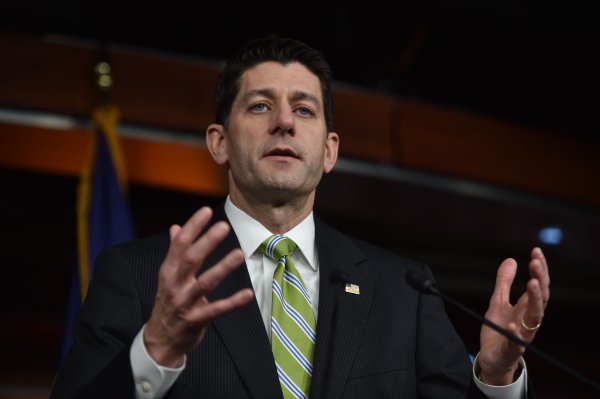 Health Care Bill Would Exempt Lawmakers From Rollbacks
Next Up: Editor's Pick