Ivanka Trump fielded questions about her father’s administration and her role on it during a panel discussion Tuesday about female entrepreneurship in Berlin, Germany.

Trump defended her father as an advocate for women and families at the Women’s 20 Summit, drawing boos from the audience. German journalist Miriam Meckel, who moderated the panel, quickly seized on the audience’s response, asking the First Daughter to expand on her father’s advocacy given his past record and comments on women. Trump responded with a line of defense she deployed on the campaign trail — that she could vouch for his support as a boss and a daughter.

Here’s the transcript of this exchange from the panel.

MODERATOR: “You are the first daughter of the United States, and you are also assistant to the U.S. president. As part of the audience, especially the German audience is not familiar with the concept of a first daughter, I’d like to ask you your role — to whom are you representing? Your father as the president of the United States, the American people or your business?

IVANKA TRUMP: “Well certainly not the latter, and I am rather unfamiliar with this role as well, as it is quite new to me. It has been a little under 100 days, but it has just been a remarkable, an incredible journey. So you know, as an entrepreneur and as an individual prior to this in the private sector, I care very much about empowering women in the workplace and the opportunity to have an elevated platform, to be able to sit here on this stage, and thank you, Chancellor, for your very gracious invitation. I am humbled to be here with so many formidable leaders, to engage in dialogue, to learn, to bring the advice, to bring the knowledge back to the United States, back to both my father and the president and hopefully, that will bring about incremental, positive change, and that is my goal.

So this is very early for me. I’m listening, I’m learning, I’m defining the ways in which I think I’ll be able to have impact. I am seeking the counsel — to use your word — of informed and thoughtful women and men and I’m really striving to think about how best to empower women in the economy, both domestically and across the globe, because it’s all interrelated. So it’s been wonderful today and I have no doubt that coming out of this trip, I’ll be all the more informed.

MODERATOR: “You wrote in an op-ed in the Financial Times, ‘We know what works in women in business.’ If we know what works, first question why don’t we do it, and second question, are you sure that works for you as a first daughter will also work for every other women?”

IVANKA TRUMP: No. I think we represent 50% of the population, so there is no one-size-fits-all when you think about women in the workplace or women as job creators. And then you have the cultural overlay, which differs from country to country, from region to region, within regions, there are enormous problems. I feel fortunate in America that those problems are less than in other areas of the world.

When we think about gender inequality, but we still have formidable problems in our own way, when you think about the fact that 30% of U.S. privately owned businesses are women business, that leaves tremendous potential for growth. Of that 30%, only 16% of businesses have employees beyond the owner. So when you think about the potential women have both to expand as women entrepreneurs, and both become more robust employers in their economy, it’s incredibly exciting. There’s a lot of wood to chop and we’re not right there yet, and I think one of the interesting things is the problems are identifiable. We know what they look like and they’re the same across the globe, just with varying degrees of disparity.

The solutions and the tactical means to get to the right outcome will differ. And I think one of the great opportunities we have as we travel and as we talk to knowledgeable and informed people is to find out what’s worked in their countries and cultures. I know that Chancellor Merkel just this past March, you passed an equal-pay legislation to promote transparency and to try to finally narrow that gender pay gap. And that’s something we should all be looking at — to see the efficacy of that policy as it gets rolled out. So there’s this robust dynamic ad and ever-moving discussion, it’s a political discussion, it’s policy-oriented as we think about paid leave. Sadly, the United States is one of the only countries in the world, the only developed country in the world, that doesn’t have a paid-leave policy for the benefit of families, so that is something I’m very proud of my father’s advocacy, long before he came into the presidency, he championed this in the primaries. He’s been a tremendous champion of supporting families and enabling them to thrive in the new reality of —”

[Audible booing for the audience]

MODERATOR: You hear the reaction from the audience, so I need to address one more point. Some attitudes toward women your father has displayed in former times might leave one questioning whether he’s such an empower for women. How do you relate to that? Are things changing? What’s your comment on that?

IVANKA TRUMP: I’ve certainly heard the criticism from the media and that’s been perpetuated, but I know from personal experience and I think the thousands of women who have worked with and for my father for decades when he was in the private sector are a testament to his belief and solid conviction in the potential of women and their ability to do the job as well as any man. So I think in my personal experience, and you were asking me as a daughter and also an adviser, as a daughter I can speak on a very personal level knowing he encouraged me and enabled me to thrive. I grew up in a house where there was no barriers to what I could accomplish beyond my own perseverance and my own tenacity. And I don’t take that lightly as a parent now myself. He did that and he provided that for us. There was no difference between me and my brothers and I think as a business leader, you saw that and as a President you will absolutely see that.

MODERATOR: We will be curious, thank you. 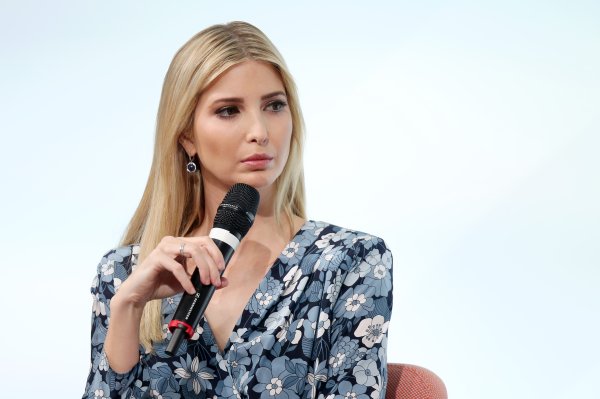 Ivanka Trump Booed in Germany
Next Up: Editor's Pick