President Trump is signaling that he is backing off his demand for border wall funding in a continuing resolution to keep the government open past Friday. Trump told a group of conservative journalists Monday evening that he would be OK accepting the money in fiscal year 2018, which begins in October. The walk-back could present an off-ramp to avoiding a government shutdown, but officials caution talks are still ongoing on both sides of Pennsylvania Avenue.

A congressional investigation into former National Security Advisor found “no evidence” he took steps to comply with the law when he took money from Russia and Turkey, Rep. Jason Chaffetz said Tuesday morning. It marks the latest development in the downfall of Trump’s one-time closest foreign policy aide, who was fired after just weeks on the job because he apparently misled Vice President Mike Pence about his contacts with the Russian Ambassador. Meanwhile, the White House told lawmakers it won’t produce documents for their investigation into Flynn.

Ivanka Trump is booed in Berlin. Trump’s unpredictable foreign policy has its costs. And the State Department removes a promotion for Mar-a-Lago from its website.

Trump at 100 Days: ‘It’s a Different Kind of Presidency’
In interview, he reflects on his impact [Associated Press]

Ivanka Trump Faces Skeptical Audience in Berlin
The first daughter’s inclusion on a panel of world leaders gives insight into Angela Merkel’s strategy for diplomacy with the U.S. president [Politico]

Trump Foreign Policy at 100 Days: The Downside of Unpredictability
No one speaks for the administration with authority [Yahoo]

“The statement that was put out is consistent with the statements that have been put out for at least several of the past administrations.” — White House Press Secretary Sean Spicer explaining why Trump didn’t call the killing of 1.5 million Armenians a genocide

“I think he’s been consistent about two things. One, that he has a heart. He wants to make sure that he does what’s in the interest of children in particular. But secondly, I think the President’s priorities since he took office have been very clear that the focus would be on folks who presented a danger to public safety. And that’s what it’s been, and that’s where it continues to be. And I think he is someone who understands the issue and the priorities that need to get laid out by this country. And so everything that he has done has been consistent with what he said from the get-go.” — Spicer on why Trump said Dreamers have nothing to fear

President Trump Threatened to Withhold Money From Sanctuary Cities. They May Not Lose That Much [TIME] 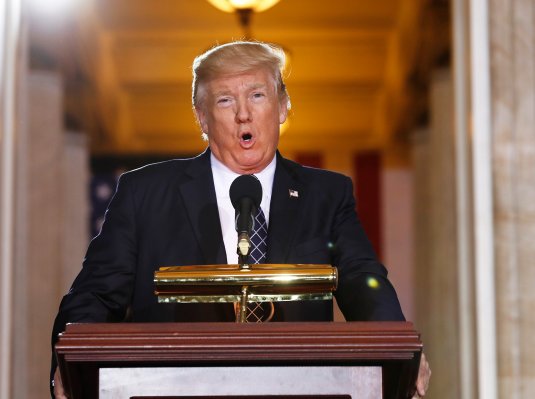