President Donald Trump joked with astronaut Peggy Whitson about her having to convert urine into a drinkable solution during a special call from the Oval Office on Monday.

“Better you than me,” he told Whitson, who as of Monday had officially clocked more time in space than any other American astronaut. President Trump, along with his daughter Ivanka Trump and astronaut Kate Rubins, called Whitson to congratulate her on setting an “incredible record.” He also said how proud he was of the work she and other astronauts do on the International Space Station. The conversation was broadcast live to schools and museums across the United States.

The group also chatted about the work astronauts do in space, a typical day in the life of an astronaut on the space station, and the U.S.’s goal of sending humans to Mars. While Whitson told Trump she is “absolutely ready to go to Mars,” she noted that the U.S. will likely not be ready to actually send humans to the red planet until around 2030.

“The real steps are going to be taken in a few years, so by studying math, science, engineering, and any type of technology you’re going to have a part in that,” Whiston told the young people tuning in.

President Trump had joked that he’d like to get astronauts to Mars by the end of his first term. “But, if not, in my second,” he said. 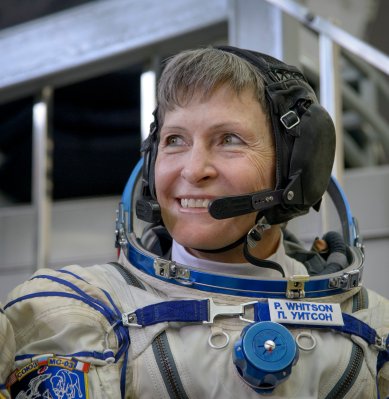