Thousands of scientists and protesters are expected to rally in Washington, D.C., and other cities around the country Saturday for the March for Science.

Assembling on Earth Day, the March for Science organizers and the Earth Day Network will gather at the National Mall in Washington, D.C., for speeches and programs before marching through the streets of the nation’s capital.

Mona Hanna-Attisha, the pediatrician responsible for exposing the water crisis in Flint, Mich., will speak at the rally, along with science educator Bill Nye (of Bill Nye the Science Guy).

Similar events will take place in other cities around the world, including Los Angeles, New York City and Chicago, among others. About 500 of these events are expected take place.

While scientists typically steer clear of politics, some of become vocal in light of Trump Administration policies that affect their work, including proposed budget cuts to the Environmental Protection Agency and the National Institutes of Health.

“The march has generated a great deal of conversation around whether or not scientists should involve themselves in politics,” the organizers said. “In the face of an alarming trend toward discrediting scientific consensus and restricting scientific discovery, we might ask instead: can we afford not to speak out in its defense?”

Watch the event in Washington, D.C., live in the video above. 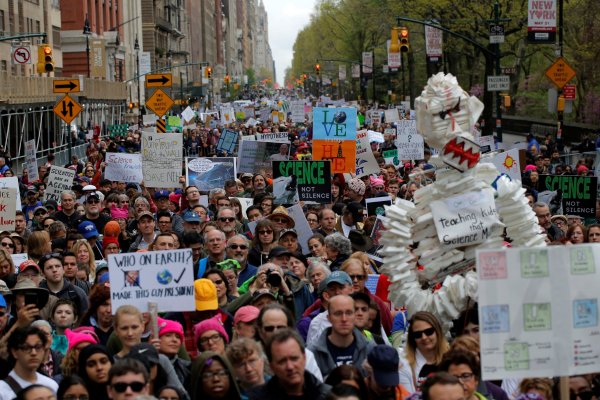 Scientists March
Next Up: Editor's Pick