Why the White House Push on Health Care Risks a Shutdown

President Trump’s desire for a signature achievement as he approaches his hundredth day in office has prompted the White House to revive the failed bid to repeal Obamacare as part of a must-pass spending bill next week. The gambit has thrown Congress into a state of confusion that further jeopardizes its ability to keep the government open.

Lawmakers return to Washington next week with a hard deadline of Friday to pass a plan that would keep the lights on at government agencies. Leaders in both chambers are scheduling conference calls in the coming day to brief lawmakers. But with the spending bill in flux and the White House pushing for a speedy vote on a third try to scrap and replace Affordable Care, there is no clear picture about what, exactly, is on the table.

The deadline comes with deep risks. The market for individual insurance plans is on shaky ground, and the U.S. Chamber of Commerce has warned the White House to tread carefully lest it send some providers into a death spiral. A hasty repeal could further undermine that marketplace. Shuttering the government could tank financial markets and send dangerous ripples around the globe. Neither would help Trump, who is especially mindful of public perceptions of his Administration as he nears his 100-day mark, or a Republican Party still trying to prove itself capable of governing,

Yet with the shutdown looming, the White House is discussing merging the spending measure with a repeal of Obamacare. A draft of the legislative language for the spending bill could circulate among lawmakers before they return on Monday. Separately, a compromise between the leaders of the House GOP’s centrist and far-right blocs is also afoot to deal with health care. And some of the strongest social conservatives are urging colleagues to cut off all funding to Planned Parenthood—even though no one in party leadership is eager to take up that fight at this time.

Republican leaders in the House and Senate say that taking up two difficult challenges on a compressed timeline is simply not realistic. “This fell apart in the House last time. Why would they go down this road again, with the stakes this much higher?” asks a senior aide to Republican leadership in the Senate, noting the revised plan to kill Obamacare has not had a hearing, the nonpartisan budget office hasn’t had time to estimate its costs and the Senate is no more eager to take up a straight party-line bill than it was before.

Another sign that the party wasn’t prepared for the health care reboot? Its chief champion of a do-over, Vice President Mike Pence, is in Asia. House Speaker Paul Ryan, meanwhile, is visiting Europe. And with Congress on recess, there aren’t many lawmakers around for the White House’s team of lobbyists to woo.

The funding bill might be the best option for the President’s team to notch a win before the clock strikes 100 days, an event that will be furiously hyped on the cable news programs the President watches constantly. Two White House officials say the Obamacare repeal provisions are in the works, though they also stressed that nothing has been finalized. The President himself is pushing hard—and looking at a shutdown as a way to deliver on his campaign promises. He has sought to marry a scaled-back repeal plan with the government-funding plan as a take-it-or-leave-it gamble.

“We have a good chance of getting it soon,” the President said Thursday during a press conference in the East Room. “I believe we will get it, and whether it is next week or shortly thereafter.”

Privately, Republicans who work in Congress are grousing that Trump still hasn’t figured out how to guide legislation through their hallways. Pushing an Obamacare repeal alongside a government funding plan faces tough odds, if not impossible ones. One top adviser to House leadership suggested that the whole gambit was ill-conceived and might not even see the light of day. “The last time I checked, the White House doesn’t control our calendar,” the adviser says.

The Senate is similarly reluctant. The chamber is not prone to quick action, and that’s unlikely to change just because Trump wants a win in stories grading his first 100 days. “We are going to need Democratic votes,” a second aide in Senate Republican leadership says with exasperation. “Why would we piss them off with these sideshows?”

Democrats are not going to support a spending provision that includes anything resembling a repeal of Obamacare. Though many recognize the law needs tweaks, they are none too eager to give Trump a win on this. Nor will they allocate money for a brick-and-mortar border wall, or anything that looks like the “deportation force” that Trump proposed during his campaign to round up immigrants in the country illegally. They may, however, go along with a slight boost to Pentagon funding or even boosted technology to patrol the U.S.-Mexican border.

The result is broad confusion about what awaits with the clock ticking down. Deadlines are often the only catalysts for action in Washington. A crisis has to be on the horizon for lawmakers to take decisive action, and even then there’s no guarantee. The last government shutdown was in 2013, when Sen. Ted Cruz tried to use a funding deadline to scrap President Obama’s health care law. Instead he shuttered the government and tanked the GOP in public opinion polls, forcing the bruised party to relent with Obamacare still on the books.

Few Republicans want to repeat that debacle. As a backup plan, the party’s leaders are preparing a one-week temporary funding measure to keep the doors open should things collapse. One senior aide likened it to an “in-case-of-emergency” parachute—no one really wants to use it. Instead, party leaders are trying to nudge their members to a compromise proposal that pushes these big-ticket ideas to the fall’s budget negotiations.

That’s right. Congress will have to do all of this again in in a few months, because the government has been running on an interim spending plan negotiated while President Obama was still in office. Lawmakers from both parties have said they would fund the government for the full fiscal year starting in October—a novel move these days.

— With reporting by Zeke J. Miller and Sam Frizell. 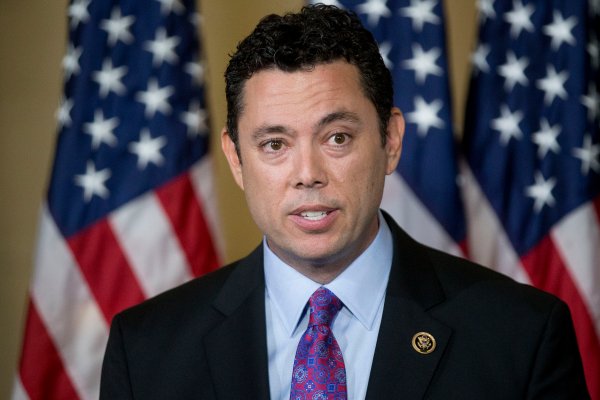 Jason Chaffetz Won't Run for Reelection in 2018
Next Up: Editor's Pick