Leading up to Wednesday night’s Guardians of the Galaxy Vol. 2 world premiere, Anna Faris is giving fans the gift of documenting her and husband Chris Pratt’s every move.

The Mom actor began live-tweeting the day bright and early by declaring that she was getting ready to shower at 8:24 a.m. “It’s the big premiere day for @Guardians,” she wrote. “Going to keep you updated! This is me at 8:24 a.m. in front of the shower.”

However, as happens to the best of us, she got distracted by Twitter and decided to get back in bed for a few more minutes: “8:27 a.m. Me on the bed not taking a shower and playing twitter. This might be a long day for you guys.”

Pratt made his first appearance in the online saga as Faris captured a covert shot of the real-life Star-Lord returning from yoga. She followed that up by posting an adorable photo of the couple’s son Jack before finally hopping in the shower.

After sharing a “stars—they’re just like us” moment and eating some store-bought raisin toast, Faris tweeted a throwback selfie of herself and Pratt from a trip to Japan. “Going through photos again,” she wrote. “This is chris kissing my freezing nose in Tokyo please don’t vomit. I just did.”

Based on her next two updates — pictures of her newly-washed hair and a possible outfit choice — it seemed as though she had begun the process of getting ready for the premiere. 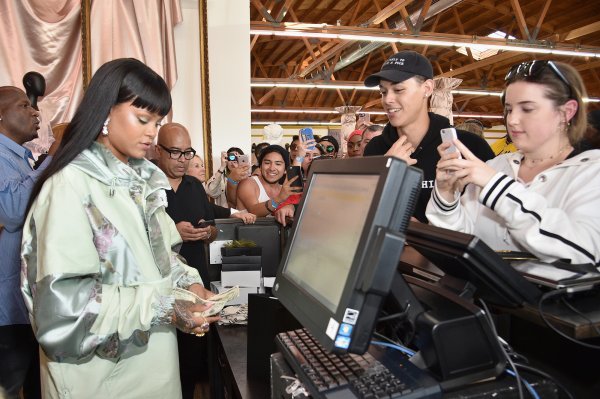 Rihanna Mastered a Cash Register Proving She Really Knows How to 'Work'
Next Up: Editor's Pick