Stephen Colbert Slams President Trump for Getting 'His Wars Mixed Up'

Stephen Colbert kicked off Monday night’s episode of The Late Show by taking a few minutes to blast President Donald Trump for recently seeming to confuse Syria with Iraq.

After airing a clip in which POTUS revealed to Fox Business Network that he told Chinese President Xi Jinping about ordering a airstrikes on Syria — but mistakenly said Iraq before correcting himself to say Syria — while enjoying “the most beautiful piece of chocolate cake” at Mar-a-Lago, the host slammed Trump for the mix-up.

“Hey, South Korea, before the war starts — just to be on the safe side — you might want to break out the spray paint,” he said in reference to Trump’s warnings to North Korea, showing a map of the two countries with the words, “The good Korea (Do not bomb),” graffitied on the southern half. He went on to say “it’s easy for Trump to get his wars mixed up.” 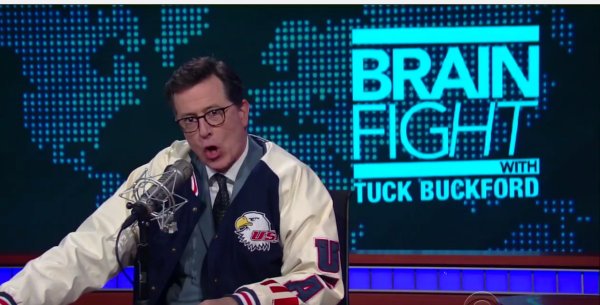