Prime Minister Theresa May prepares to make a statement to the nation in Downing Street on April 18, 2017 in London, United Kingdom.
Dan Kitwood—Getty Images
By Tara John

British Prime Minister Theresa May called for a surprise ‘snap’ election Tuesday, ending months of speculation as to whether she will pull the trigger in order to exploit the weaknesses of the opposition Labour Party and strengthen the government’s Brexit position.

But May can’t just simply order an election to be held. Instead, she needs approval by a parliamentary supermajority. Here, a guide to the process:

Why can’t she just call an election?

It’s due to a law introduced under her predecessor as Prime Minister, David Cameron. Until 2010, prime ministers could call an election whenever they wanted. The coalition government of then-Prime Minister Cameron introduced the Fixed-Term Parliaments Bill, which his administration said would be a way to remove the unchecked right of the prime minister to dissolve Parliament and trigger the election for “pure political gain.”

“For the first time in our history, the timing of general elections will not be a plaything of governments and Prime Ministers will no longer have the power to go to the polls at a time of their own choosing,” Deputy Nick Clegg told lawmakers during the bill’s second reading in Sept. 2010. “Instead, there will be greater stability in our political system and people will know exactly how long a parliament can be expected to last.”

The Fixed-term Parliaments Act (FTPA) came into law a year later and provided a fixed polling day for general elections— held every five years on the first Thursday in May. The next election is due to take place in May 2020.

So how is she planning to hold one?

The FTPA allows for two ways for the fixed five-year term to be cut short:

May has chosen the first option, which requires a parliamentary vote scheduled for Wednesday.

Under the terms of the FTPA, May will need 434 out of the total 650 lawmakers in the House of Commons to back her. This means May needs more than 100 lawmakers from opposition parties to vote for an early election, as her party only has 330 seats.

Is there a risk of her losing?

It’s highly unlikely. Opposition parties will find it hard to vote against the chance to defeat the Conservative Party at the ballot, despite the vulnerability of some of their seats. Labour Party leader Jeremy Corbyn, whose party holds the most seats in opposition, has already said his lawmakers will vote for an election on Wednesday.

During her speech on Tuesday, May goaded the opposition to pass her Wednesday motion. “This is your moment to show you mean it, to show you are not opposing the Government for the sake of it, to show that you do not treat politics as a game” she said. “Let us tomorrow vote for an election, let us put forward our plans for Brexit and our alternative programmes for government and then let the people decide” she said. 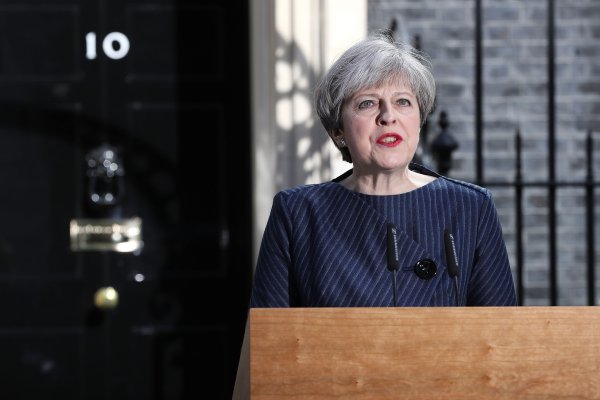 7 Times Theresa May Said She Wouldn't Call for a General Election
Next Up: Editor's Pick