Theresa May Shocks Britain by Calling for Snap Election

British Prime Minister Theresa May has announced her intention to call a snap general election on June 8, an unexpected move intended to cement her position as Brexit negotiations begin.

May had repeatedly insisted she would not call an early election in the months and weeks before her statement. As recently as March 20, a spokesperson said “There isn’t going to be one … we have been clear that there isn’t going to be an early general election and the Prime Minister is getting on with delivering the will of the British people.”

But in a surprise statement on Tuesday she said an election would be the “only way to guarantee stability and certainty for the years ahead” as the U.K. prepares for two years of negotiations over the terms of its withdrawal from the European Union. She added she had come to the decision “reluctantly.”

She positioned the vote as an opportunity to end divisions in Westminster over the Brexit negotiations while the E.U. is still preparing its position. The failure of opposition parties to unite on a plan for talks “weakens the governments negotiating position,” she said. “If we do not hold a general election now their political game playing with continue.”

“We need a general election, and we need one now,” she added. “Because we have at this moment a one-off chance to get this done.”

There are plenty of other reasons for her reversal. Firstly, she now leads the country without a popular mandate, having won the office of Prime Minister by becoming leader of the Conservative Party and succeeding Cameron on July 13, 2016 just three weeks after Britain voted to leave the European Union.

Secondly, polls suggest May would be strongly favored to win if a general election were held. A poll released over the Easter Weekend gave her Conservative Party a 21-point lead over the main opposition Labour Party, a record. The ComRes poll gave the Tories a 46-point share of the vote to Labour’s 25 points.

Calling a general election is no simple matter — it requires approval by a parliamentary supermajority, thanks to the Fixed Term Parliament Act passed in 2011 by the coalition government led by David Cameron. Two-thirds of members of parliament (MPs) would have to approve an early election, or 434 of the 650 lawmakers in the House of Commons. May’s party currently has only 330 seats, meaning she would need to convince over 100 lawmakers from rival parties to vote for an early election.

Lawmakers are widely expected to vote in favor of the election, however. Jeremy Corbyn, leader of the opposition Labour Party, has welcomed the opportunity to vote early and said his lawmakers will support the motion in parliament. Moderate lawmakers within Corbyn’s party might do so in anticipation of a defeat that would rid them of the veteran leftist, who has overseen a collapse in wider support for Labour.

The Scottish National Party, which commands 54 seats in Westminster, might also enjoy the opportunity to demonstrate their strength ahead of a possible second independence referendum. 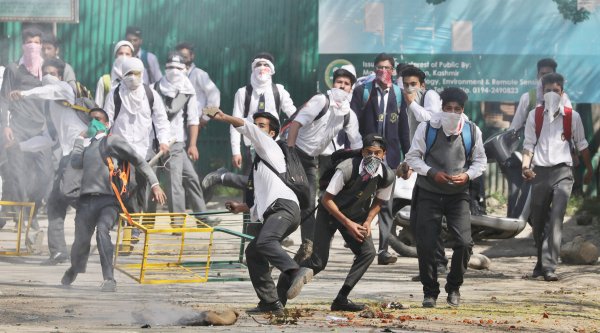 Schools Close, Protests Grow as Tensions Simmer in Kashmir
Next Up: Editor's Pick