The episode’s host, Jimmy Fallon, played an ex-boyfriend trying to win back the affection of Jen, played by castmember Cecily Strong — barging in her while she was on a date with another man and serenading her with Savage Garden’s “Truly Madly Deeply.”

“So what do you say Jen?” Fallon asks Strong, before getting down on one knee. “I know I made one of the biggest mistakes a person can make, and I’m sorry. And I’m asking you to take me back.”

He is quickly rebuffed — with a dig at United Airlines. “No Doug!” Strong said. “You dragged a man off a plane this week!” The airline was criticized for forcibly removing a man from a packed plane in Chicago, causing him a range of injuries including a broken nose and a concussion.

Once she ditches Fallon, she goes back to her other date and finds out he just directed the Pepsi commercial featuring Kendall Jenner, which was pulled amidst controversy. 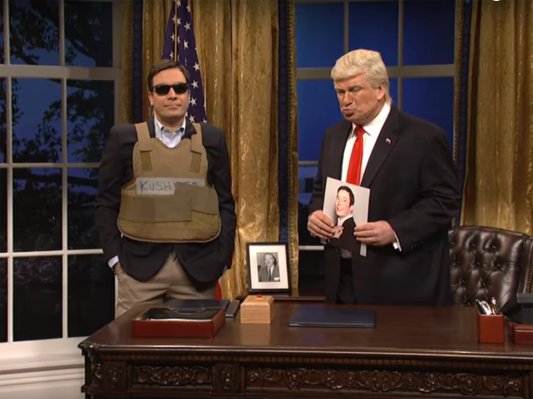 Jimmy Fallon Returns to His 'SNL' Roots for Jared Kushner Parody
Next Up: Editor's Pick