President Trump likes to cast himself as “flexible” and that trait has been on stark display this week as he flip-flops on key policy positions from the campaign — and in some cases from just weeks ago. He’s shifted on NATO, whether to keep on Fed Chair Janet Yellen, the Export-Import Bank, and China’s status as a currency manipulator — and that was just Wednesday. It marks a pronounced shift from the populist agenda he championed in 2016 toward those of a more conventional Republican politician, and reflects the weakened status of Chief Strategist Steve Bannon after months of infighting inside the White House. Yes, this marks a major shift from Trump’s go-it-alone strategy, as he seeks to tack to the center on key issues that have created a wedge between himself and his party. But Trump has always had nationalistic tendencies, and he’s on all sides of these issues before. Only time will tell how permanent this shift is, but it’s a clear indication that Trump is unhappy with the direction of his presidency as he nears the 100 days mark, and is willing to upset even his most fervent supporters if it means he can bridge the partisan divide.

Meanwhile, Trump’s foreign policy is increasingly being defined by countries around the globe rather than by his Administration. When Trump makes phone calls, the White House releases brief and often substance-less statements. When Secretary of State Rex Tillerson visited with Russian President Vladimir Putin Wednesday, he left his press corps behind. Other governments are filling the vacuum, providing their own — self-serving — “readouts” of these meetings and interactions, which can have the effect of putting the Administration in a reactive position right out of the gate.

Trump dumps on Bannon. Manafort registers as a foreign agent. And inside the grassroots movement to groom a new generation of Democratic candidates

“I said it was obsolete. It’s no longer obsolete.” — President Trump on NATO at a Wednesday press conference

“So what happens is I said we’ve just launched 59 missiles heading to Iraq and I wanted you to know this. And he was eating his cake. And he was silent.” — Trump in an interview with Fox Business misstating the country he bombed—and plugging his club’s dessert offerings 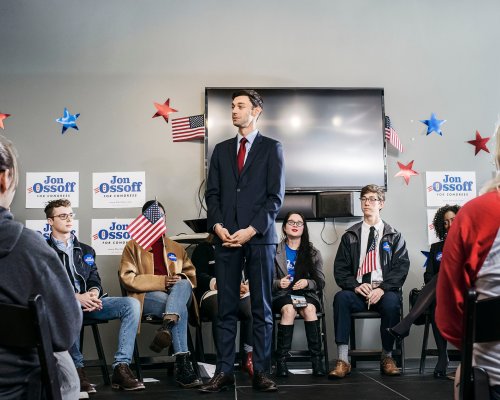 Inside the Grassroots Movement to Groom a New Generation of Democratic Candidates
Next Up: Editor's Pick