Meet the Comedian Who Trolled Sean Spicer, United Airlines and Pepsi in 1 Meme

Spicer’s incorrect comments about Hitler during a press briefing Tuesday — for which Spicer has since apologized — had caused an outcry. In 15 minutes, the Sparta, N.J.-based comedian edited Spicer’s face onto the body of a United Airlines pilot, and Pepsi’s logo onto a stock image of a soda can, using the magic wand and erase tools. He wanted it to be realistic enough, but above all, quick.

“It was like every day was a PR nightmare,” he tells TIME. “He [Spicer] was having one of his rougher weeks, and with Pepsi and United’s really big flubs, I wanted to combine all three into this manifestation of three trending topics on Twitter’s mind in human form.”

“You can’t really put a face on United, and you can’t put a face on Pepsi because people don’t really want to see a Kardashian or a Jenner in there,” he says. “He’s so recognizable that I knew he was the one who would really take off.”

Melberger says his girlfriend took one look and said, “that’s funny.” As many as 21,000 people who liked the image — including many journalists — agreed, and the internet was quick to chime in.

A self-described liberal who got his viral comedy start on Vine, Melberger tackled politics before, notably in his series, If Donald Trump Had YouTube.

The Marist graduate, who studied digital media, says people are already asking for more memes, and he’s open to a series. But the events may not align.

“I don’t know if we’ll ever have this much of a crazy week,” Melberger says. 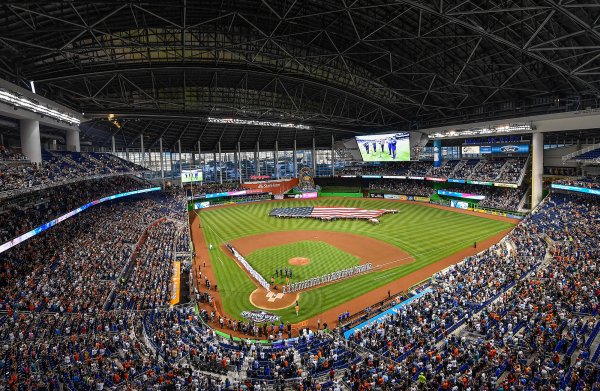 Watch an Adventurous Cat Bravely Venture Onto the Baseball Field During a Game
Next Up: Editor's Pick