Here's Why Easter Eggs Are a Thing

Easter, which takes place on April 4 in 2021, usually occurs towards the beginning of spring, a season when plants bloom and animals give birth. Eggs in particular are a clear symbol of rebirth and fertility. So it may not seem surprising that Easter eggs are often associated with Easter, a holiday that celebrates the resurrection of Jesus Christ. It may also be no surprise they are sometimes referred to as “resurrection eggs.”

But when it comes to Easter eggs, evidence suggests that the obvious metaphor came after the association between the holiday and the item was already established.

The origin story of Easter eggs starts in Medieval Europe, but it may or may not have originated with Christians. According to some, the first Easter eggs actually belonged to a different religious tradition.

“Many scholars believe that Easter had its origins as an early Anglo-Saxon festival that celebrated the goddess Eastre, and the coming of spring, in a sense a resurrection of nature after winter,” Carole Levin, Professor of History and Director of the Medieval and Renaissance Studies Program at the University of Nebraska, tells TIME in an email. “Some Christian missionaries hoped that celebrating Christian holy days at the same times as pagan festivals would encourage conversion, especially if some of the symbols carried over. Eggs were part of the celebration of Eastre. Apparently eggs were eaten at the festival and also possibly buried in the ground to encourage fertility.”

An alternate Easter eggs story does stick with Christianity, but in that version the Eastern eggs may have been a matter of practicality. Back then, the rules for fasting during Lent were much stricter than they are today. Christians were not allowed to eat meat or any animal product — including cheese, milk, cream or eggs —so they hard-boiled the eggs their chickens would produce during that time, and stored them so they could distribute them later, according to Henry Kelly, a professor of medieval studies at the University of California, Los Angeles. Because Lent ends in the lead-up to Easter, that “later” at which the eggs would be given out (often to the poor, who were unable to afford meat for their celebrations) would naturally happen right around the holiday.

But what about the tradition of dying Easter eggs for the Easter Bunny to hide for kids?

One of the earliest pieces of evidence of dyed eggs in British history goes back to 1290, when the household of Edward I bought 450 eggs to be colored or covered in gold leaf to be distributed among “the royal entourage” for Easter, according to Stations of the Sun: A History of the Ritual Year in Britain by Ronald Hutton, a history professor at the University of Bristol. The book also mentions that two centuries later, the Vatican sent Henry VIII an egg enclosed in a silver case as a “seasonal present.” Such objects were also known as “eggsilver.” (Today, the most famous ultra-decorated Easter eggs are the Fabergé eggs that were first presented to the Russian royal court in the late 19th century.)

Residents of 13th century English villages brought gifts of Easter eggs to their manorial lords every holiday, and eggs also became what people would give to the church as a special offering on Good Friday. There’s evidence that such eggs were colored — especially red, a color thought to signify joy — to be given as gifts in the 16th and 17th centuries, Levin adds, and residents of a southwestern area of Lancashire paid their “Easter dues” in these eggs up through the early 18th century even as the gentry switched to cash.

It was in the late 19th and early 20th centuries that dyed Easter eggs became something to give to children rather than to the Church, the poor or to local authorities. The Victorian era was a notable time of change for ideas about family life, and Easter was among the many religious holidays that saw a shift toward family-friendliness, with an emphasis on rituals geared toward kids. The Victorian middle classes “had a fascination with old traditions,” says Anthony Aveni, author of The Book of the Year: A Brief History of Our Seasonal Holidays and a professor of Astronomy and Anthropology at Colgate University, so the Easter egg-dying tradition (like the idea of an “Easter Bunny” who delivers Easter eggs) was a natural fit. Easter-egg hunts soon followed, and it was right around that time that the first White House Easter Egg Roll took place, in 1876.

The working classes began adopting these traditions in the first half of the 20th century as their wages increased a bit, allowing them to invest more in the holiday celebration. When Easter was incorporated into the official public holiday schedules so that workers would also get time off for the day, that “both enhanced the status of Easter and provided an incentive to find special things to do at it,” Hutton tells TIME.

By the end of the 20th century, Easter eggs could mean any hidden treat — but the real deal, whether made of Oreo Creme or actual eggs, continues to delight each year at Easter time. 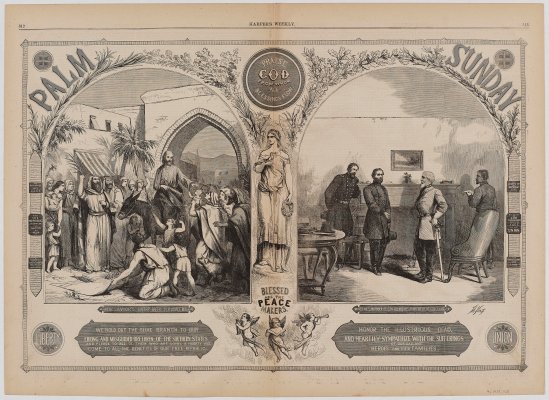 Abraham Lincoln Was Shot on Good Friday. Some Thought It Was Fate
Next Up: Editor's Pick