The U.S. fired 59 Tomahawk cruise missiles at a Syrian airbase early Friday in response to what it believes was a Syrian-regime-ordered chemical attack that killed more than 80 people in the country’s northwestern region earlier this week.

The strike, which was launched from two Navy destroyers in the Mediterranean Sea, targeted the Shayrat air base in Homs, western Syria. A Pentagon spokesperson said U.S. intelligence determined that the air crafts carrying the chemical weapons departed from the air field, which is located about 86 miles from Khan Sheikhoun, the town where the deadly chemical attack occurred.

The Syrian military reported that the U.S. assault killed at least seven people and caused significant damage, according to the Associated Press. The Pentagon says it was careful to avoid civilians. Russia, meanwhile, disputes the effectiveness of the attack and called the strike an “aggression against a sovereign state in violation of international law.”

This map shows the location of the Shayrat air base along with the town of Khan Sheikhoun. 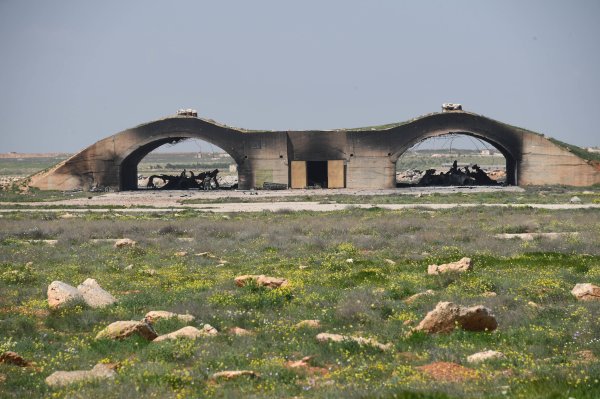 'One Airbase Is Not Enough.' Syrians Opposed to Assad Welcome Strike, But Hope for More
Next Up: Editor's Pick