The Trump Administration Warned Russia About the U.S. Missile Attack on Syria

The Trump administration notified Russia in advance of missile strikes on Syria Thursday night, giving time for both Russian and Syrian forces to avoid casualties in an attack that the Pentagon says damaged Syrian aircraft and support infrastructure.

A U.S. official said President Trump did not speak with Russian President Vladamir Putin, who has forces deployed in Syria to support the government of Bashar al-Assad.

“We sought no approval from Moscow,” said Secretary of State Rex Tillerson in a briefing, after the U.S. military launched 59 cruise missiles on the Shayrat Airfield.

Tillerson told reporters that Russia had failed to secure the country’s chemical weapons as part of an agreement negotiated by President Obama in 2013 to prevent U.S. strikes. “Clearly Russia has failed in its responsibility to deliver on a commitment that was made back in 2013,” Tillerson said. “”Either Russia has been complicit or incompetent in its ability to deliver on that.”

Earlier this week, at least 72 people, including many children, died in the town of Khan Sheikhoun and intelligence agencies blamed the Syrian regime. On Thursday, President Trump said the chemical weapon attack had been launched from the Shayrat Airfield.

“There can be no dispute that Syria used banned chemical weapons, violated its obligations under the Chemcial Weapons Convention and ignored the urging of the U.N. Security Council,” Trump said. “Years of previous attempts at changing Assad’s behavior have all failed and failed very dramatically.” 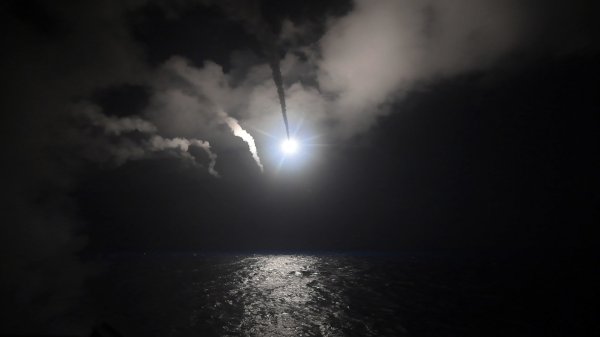 The U.S. Strikes Syria
Next Up: Editor's Pick