It’s a big foreign policy week for President Trump, who is hosting the leaders of Egypt, Jordan and China. On Monday, he hosted Egyptian President Abdel Fattah el-Sisi at the White House—his first visit to the Oval Office since he seized office in a 2013 coup. Trump heaped praise on el-Sisi, who has faced widespread criticism from human rights groups. “I just want to let everybody know in case there was any doubt that we are very much behind President el-Sisi,” Trump said. During the campaign, Trump had criticized then-President Obama for failing to put human rights issues on the front-burner with foreign leaders. Now Trump is taking a far less ideological approach, with the White House refusing to say whether Trump raised the issue even in private. Trump’s meeting with Chinese President Xi Jinping will come as the Trump Administration is escalating its focus on trade policy, with the White House ordering up new reports designed to highlight the trade imbalance with China.

White House officials are huddling with House conservatives over a potential reboot to the legislation to repeal and replace Obamacare, but there are still few signs of life. And even if concessions designed to win over the House Freedom Caucus work, they will even further doom that version of the bill in the Senate. In short, Republicans are about to be forced to shift focus to keeping the government, so don’t hold your breath.

Democrats have the votes to filibuster Judge Neil Gorsuch’s nomination to the Supreme Court, setting up a high-stakes showdown that could permanently reshape nominations in Washington and even the high court. Expect some 11th-hour efforts to try to de-escalate tensions, but even the broad parameters of a deal are hard to spot.

“He isn’t taking a salary, I think he’s stepped down from his business. He’s walked away from a lot. I think at some point he’s done quite a bit in terms of handing — making a donation to the government.” — White House Press Secretary Sean Spicer on why Trump won’t reimburse New York City or Florida governments for the cost of securing his residences

Washington may be shaking its head, but Devin Nunes is still a hometown hero [LA Times]

‘We got left behind’: The Coast Guard’s top officer laments being excluded from Trump’s military funding [Washington Post]

Nikki Haley Says Syria’s Assad Is a War Criminal, but the U.S. May Need Him [Associated Press]

President Trump Donated $78K From His Salary to National Parks. He Wants to Cut Down the Department That Funds It [TIME] 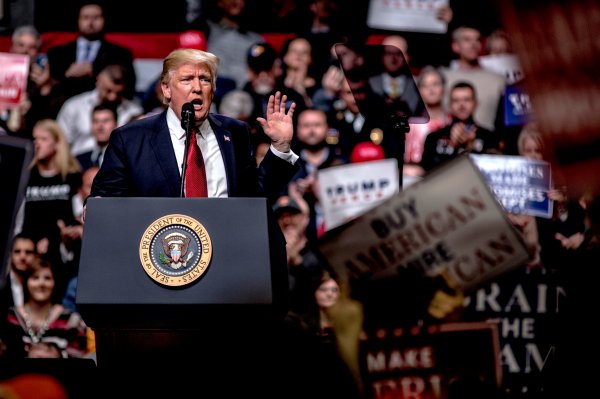