‘I think history is saying to us today, not just in America but around the world, Which side are we on? Are we going to be on the right side or the wrong side?’
Teresa Kroeger—WireImage
Ideas
By Lily Rothman
Lily Rothman is Assistant Managing Editor, Magazine, at TIME

The Georgia Congressman and veteran of the civil rights movement discusses the health care vote, a Russia investigation and why he’s hopeful for the future

You called the GOP health care overhaul bill “a shame” in a speech from the House floor shortly before that bill was withdrawn. What went through your mind the moment you heard there’d be no vote?

I was very, very pleased that the core of what President Obama attempted to do was still very much alive. Together we can fix and strengthen the Affordable Care Act. We invested so much, and it’s been so good for so many people.

President Trump’s time in office has inspired many protests even though it hasn’t been 100 days. As an expert protester, how does a resistance sustain long term?

In a movement involving protest, you must be able to give people a victory. You accept that victory, and then you go on to something else.

You’ve long been a champion of nonviolence, but some of TIME’s coverage of your work in the 1960s was about how “aggressive” you were. Why do you think we got it so wrong?

What we did, and I’m not just saying this, it was new. I think [it was called aggressive] because we were persistent, we were insistent. You go to jail one day, they let you out the next day, you get arrested, and you go back to jail.

What do you think is the next big civil rights issue in the U.S.?

Comprehensive immigration reform. It doesn’t make sense for us to have millions of people living in fear, especially children.

You’ve described feeling the “spirit of history” tell you when you’re meant to be doing something. What does that actually feel like?

It’s more than physical. It’s maybe psychological, but I think spiritual. It’s saying that the moment is right, that the time is right.

What do you think history demands of Americans now?

We used to sing an old labor song on the buses during the Freedom Rides. We would sing, “Which side are you on, boys? Which side are you on?” I think history is saying to us today, not just in America but around the world, Which side are we on? Are we going to be on the right side or the wrong side? Are you going to stand up for those who have been left out and left behind? Or are you going to give billions of dollars of tax breaks to the top and forget about the people at the bottom?

How do you feel about race relations in the U.S. today?

In spite of all the problems that we still must confront, I am very hopeful. I tell young people, if you don’t believe there’ve been some great changes, come walk in my shoes.

How has Trump compared with your expectations?

Is there anything you would see yourself working on with the White House?

I don’t know what is going to be his proposal on rebuilding infrastructure, but when I first came to Congress, I was on the Public Works and Transportation Committee.

How do you feel about continuing to be seen as a face of the opposition?

Well, I still believe there was a deliberate, systematic effort to subvert the political process, and I think it was a foreign power — the Russians — involved with the Trump campaign. I strongly feel that we need an independent commission to find out what happened and how it happened, so it will never happen again. I will not be satisfied until we get the truth. 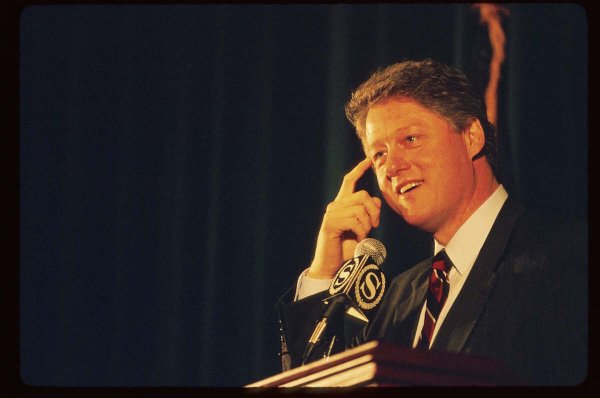 Bill Clinton Said He 'Didn't Inhale' 25 Years Ago—But the History of U.S. Presidents and Drugs Is Much Older
Next Up: Editor's Pick