Without immigrants, Silicon Valley would look very different. There would be no Amazon, no eBay. No Reddit, no Intel. Google, Tesla, and Yahoo? Gone. And you can say goodbye to your iPhone.

These are just a few of the biggest names, but half of all billion-dollar U.S. startups were founded by immigrants. Silicon Valley would simply not exist, and the United States’ position as a global tech leader might never have come to fruition.

Under President Donald Trump, we are not far from this hypothetical. Trump’s immigration ban and H-1B visa restrictions will significantly harm the U.S. technology industry, diverting the steady, decades-old stream of foreign tech talent to international competitors.

And there’s no country better positioned to welcome this diverse group of innovators than Trump’s northern neighbor: Oh, Canada. At the center of the country’s identity is Toronto — the fourth-largest city in North America. Boasting a diverse community, booming tech scene, and forward-thinking government, this city is the leading contender to welcome tech talent and become the next epicenter of innovation.

A Culture of Inclusion

It’s easy to talk in generalities when it comes to diversity and inclusion — but I’m actually a product of Canada’s welcoming stance on immigration. My family emigrated to Canada from Tanzania, East Africa. We fled political turmoil and settled in Canada to build a better life. It would also become the place where I eventually began to flourish as an entrepreneur.

Forty years later, Canada is still a beacon of hope for immigrants, an open society that is welcoming refugees in unprecedented numbers. Toronto was recently named the most diverse city in the world, and has become a cultural haven in which foreign entrepreneurs can pursue innovative ideas. In fact, it’s easier than ever for immigrants to work up north — capitalizing on Trump’s decision to delay H-1 B visas, Canada recently announced an expedited work permit process, allowing foreign talent to be approved for work in a short ten days.

Toronto recognizes that diversity both breeds innovation and is good for business. As the EVP of Venture Services at a Toronto innovation hub, I’ve seen the power of diversity on the startup teams we are advising. Of the roughly 1,000 startups within our ecosystem, 54% have at least one foreign-born founder – a higher percentage than Silicon Valley.

So, as America tightens its borders and retreats inward, diversity in cities like Toronto will flourish.

Toronto’s diverse community has fostered a rapidly growing startup scene. Recently named one of the world’s most innovative cities, Toronto is home to between 2,500 and 4,100 active tech startups, the world’s largest innovation hub, and world-class academic and research institutions.

And with 150,000 full-time students enrolled in universities in the Greater Toronto Area — many focused on science and engineering fields — the region benefits from a robust pool of entrepreneurial and tech talent. Of course, this hasn’t always been the case: while Canada has historically been victim to a “brain drain” of academic talent emigrating to the U.S., Trump’s policies will undoubtedly lead to more talent staying in Toronto; and we may start seeing the reverse as Silicon Valley talent leaves to head north. University of Toronto has already seen a 70% increase in applications from American students following Trump’s win.

As always, tech follows the money — Toronto’s rapidly developing venture capital community is setting record investment numbers. VC in Canada hit a 15-year high in 2016, with a total of $3.7 billion invested— a whopping 36% increase over 2015. I haven’t seen Canadian VC excel at this rate since the dot-com boom, and every day speak with investors from around the world looking to cash in on Canadian ventures. With names like Shopify and Hootsuite rivaling Silicon Valley successes, I can understand why they’re hedging their bets.

The New Wave of Global Entrepreneurship

Where investors see the most potential, however, is in ventures that scale — ventures that tackle tough problems and provide global solutions.

And as someone who works with fellow immigrants every day, I believe that foreign entrepreneurs are more likely to develop these types of solutions, with the broadened worldview necessary to take on global issues. In fact, amongst our ventures with foreign-born founders — over 70% have some social purpose in mind, developing solutions in areas like healthcare and clean energy. A Syrian refugee creating an open approach to drug discovery.

A Mexican immigrant developing digital solutions for mobility impairments. These are the breakthroughs I see from global entrepreneurs in Toronto every single day.

While I believe that Silicon Valley once fostered this type of innovation, somewhere along the way it got stuck in a “move fast and break things” mentality, promoting innovation for innovation’s sake. They stopped caring about true progress and started caring about VC dollars — today, you’re more likely to see the Valley pump out a new photo editing app or subscription box before a clean energy solution or drug therapy. And with Trump’s new restrictive policies, fewer entrepreneurs will be able to come to the U.S. to build the globally impactful ventures that society truly needs.

But as America shuts them out, Canada welcomes them in. Global entrepreneurs can find a home in Toronto — a city that sees beyond borders, and whose tech community leads the world with solutions in cleantech, biotech, and more. For all of Trump’s talk about bringing back jobs to America, he may actually be helping to send them to Canada. And just as it once did for my family, 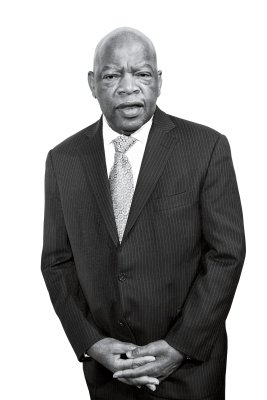 Rep. John Lewis on Failed Health Care Bill, Civil Rights and Hope for the Future
Next Up: Editor's Pick