A picture shows red London buses, pedestrians and traffic crossing Westminster Bridge over the River Thames with the Union flag atop the Houses of Parliament (R) flying at half-mast in central London on March 23, 2017.
NIKLAS HALLE—AFP/Getty Images
By Mark Leftly / London

A team of seven forensic police officers, tightly packed, on their knees and covered in blue plastic overalls, carefully dusted every millimeter of the cobbled stones in New Palace Yard Thursday.

It was here, just within the grounds of the Palace of Westminster, where PC Keith Palmer, a 48-year-old married father of two, was stabbed to death by a British terrorist claimed by ISIS, Khalid Masood on Wednesday.

Masood had already injured at least 40 people having sped along the sidewalk of Westminster Bridge, before crashing into the carriage gates of Britain’s Parliamentary estate. At least two were killed on the bridge: 54-year-old U.S. tourist Kurt Cochrane and Aysha Frade, a mother of two. A third man, 75, died of his injuries on Thursday, officials said.

Masood was shot dead, but there was immediate chaos and then a lockdown of around five to six hours as authorities and police worked tirelessly to make sure there were no further threats.

Speaking in the House of Commons today, Prime Minister Theresa May was defiant. “Our resolve will never waver in the face of terrorism,” she said. “As I speak millions will be boarding trains and airplanes to travel to London, and to see for themselves the greatest city on Earth.”

But outside the chamber there was a 1 to 2 block cordon guarded by police. An area where tens of thousands of tourists, politicians and Londoners pass through everyday was empty and eerily silent.

Lawmakers and their staff were already wondering how to beef up their security now that they are all too aware of the havoc one madman with a car and two knives can cause in what is supposed to be the mother of all parliaments.

Tom Brake, the chief whip of the Liberal Democrats who sits on the Commons’ commission that oversees parliament security, says the carriage gates have been “a particular weak point” for some time. Tourists often accidentally wander into the palace past these barriers, a loosely defended entrance that is used to quickly drive ministers in and out of Parliament.

A short-term remedy will be for cars to only go through a more secure entrance, with bollards, at the other end of the estate. The entrance to New Palace Yard is likely to be fitted with permanent barriers.

Brake also thinks the attack will see a rethink of the plans to renovate a palace that is riddled with asbestos, overrun by rodents, and blighted by sewage leaks, to name only a small handful of its problems. Lawmakers are due to debate whether to go-ahead with a restoration that is expected to take several years shortly after Easter recess.

“Security is potentially an extra element in the Restoration & Renewal of Parliament project,” Brake said. “The need to tighten security policy to protect M.P.s and staff. There is a cost issue, but that can be addressed by looking at security early and designing it in to the plans.”

That cost of the revamp — estimated, highly conservatively, at £4 billion (about $5 billion) — has resulted in many lawmakers arguing it is too costly for the public to swallow. They say there should be a new Parliament with more solid foundations and better use of modern technology, unlike WiFi that moves at a sloth’s pace in Westminster. They have argued for the palace to be turned into a museum.

However, senior critics are already reconsidering this challenge, because the terrorist only made it a few yards beyond the gates. “The other options may not be as secure as the palace,” said one lawmaker who has previously argued for a move.

Indeed, police minister Brandon Lewis told TIME: “The systems in place did work yesterday. There was a phenomenal show of heroism from Keith Palmer and the police.”

However, both of these politicians admit here will have to be a security review.

Max Freedman, a senior political researcher who leads the labor union branch for staff, will be pushing for improved communication. Some researchers who are located in a distant but nevertheless linked part of Parliament, known as the Northern Estate, have complained they were not instructed by police on how to remain safe for about two hours. Instead, they watched events unfold on television and assumed they should stay in their offices. This was despite there being public address systems in these buildings, which were not used.

Sources also said that in one of these older buildings around 50 Labour Party lawmakers and staff were bundled into the office of the leader of the opposition, the far left veteran Jeremy Corbyn. However, police were rarely on the door.

There was a “blitz spirit” according to a source who was present. Corbyn introduced a young researcher to the room who had been told to go to this safe room — despite being rather out of place given he works for the governing Conservative Party.

“He’s spoken to his employer, who told him it was alright for him to stay here: provided he doesn’t return a socialist,” Corbyn said.

As security started to relax Thursday , with entrances to Parliament slowly re-opened, Robin Walker, one of the ministers charged with conducting the U.K.’s negotiations to leave the European Union arrived with a suitcase.

He had just come back from Brussels. The previous morning he had been consoling lawmakers in the European Parliament over the one year anniversary of terrorist attacks in Brussels.

“By the afternoon, they were comforting me,” sighs Walker.

His is not the only poignant story. Clive Lewis, touted as a future Labour leader, was a sunnier afternoon away from possible death. After an interview and minutes before Masood drove into view, a photographer wanted to take a picture of him on the sidewalk soon to be mounted by the terrorist, but they turned back because the light wasn’t good enough.

Security will get tighter, but luck, both good and bad, played its part in who lost their lives yesterday. 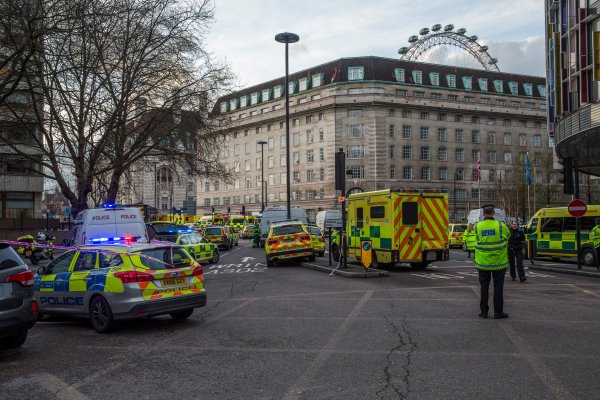 ISIS Is Claiming Attacks Abroad Because It's Losing Its Empire
Next Up: Editor's Pick