ISIS Is Claiming Attacks Abroad Because It's Losing Its Empire

The ISIS inland empire is collapsing. Faced with a relentless assault by Iraqi troops backed by American air power, the jihadi group now controls only one quadrant of Mosul, the northern Iraqi city that had been the largest population center under its control. In neighboring Syria, US-backed militias are inching closer to Raqqa, the organization’s putative capital. The battle is far from over, but the Islamic State is no longer the force that once commandeered a stretch of land from the Syria-Turkey border to the outskirts of Baghdad.

Far away from the battlefields of Iraq and Syria, ISIS claimed on Thursday to have inspired the attack in London in which a man plowed a car into pedestrians on Westminster Bridge and then stabbed a police officer on Wednesday. In a message relayed through its official propaganda arm on Thursday, the group identified the London attacker as a “solider of the Islamic State.” Police identified the assailant on Thursday as 52-year-old British-born Khalid Masood, who had prior criminal convictions including one on a weapons charges. At least four people died in the rampage, including the attacker.

The claim marked a continuation of a pattern in which ISIS attaches its imprimatur to far away attacks on civilians as a means of reasserting its relevance, even as it loses territory in theater of conflict in Iraq and Syria.

“It’s no longer able to sell itself as the same organization it was selling itself as in 2014-2015, and that’s because its insurgency is dwindling in Iraq and Syria. And it’s spending a lot more time focusing on warfare,” says Charlie Winter, an analyst at the International Centre for the Study of Radicalisation and Political Violence in London.

“It needs to find some way to derive momentum. It needs to prove that it is credible, relevant, important, legitimate, and able to be a potent menace to the rest of the world,” he said of ISIS in an interview with TIME.

The phrasing of ISIS’ claim suggested the London attack may have been inspired by jihadists’ propaganda, rather than directed by the group. The statement on the group’s Amaq News Agency said the assailant acted “in response to calls to target citizens of coalition nations,” a reference to the U.S.-led international military coalition fighting ISIS. Rather than claiming the attack outright, the statement attributed the claim to an unnamed “source,” inserting a degree of distance between the organization and the killer. There was no immediate way to confirm the attacker’s motivations. British authorities arrested eight people in an investigation into the attack.

The melee outside Parliament commanded global media attention. However the London attack stood in contrast to deadlier and more sophisticated attacks carried out by ISIS in the past. In November 2015, the group carried out the massive gun and bomb assault in Paris and claimed to bring down a Russian airliner in Egypt, killing 224 people in a single operation. In 2016 the group also struck the airports in Brussels and Istanbul, employing attackers armed with explosives and assault rifles. Much smaller in scale, the London attack involved a sport utility vehicle and a knife.

The extent of ISIS’ territory peaked in the summer of 2014 after the militants overran a vast chunk of Iraqi territory, seizing Mosul and approaching Baghdad. Since then, thousands of Iraqis, Syrians, and others have died in an international campaign to dislodge the group from its territory. The U.S.-led military coalition has launched more than 19,000 airstrikes on the organization, in an operation that is claiming an increasing civilian toll. The operation has succeeded in forcing the ISIS “caliphate” to shrink by about 25% in 2016 alone.

Closer to the battles that will determine the group’s survival, ISIS claimed responsibility for more lethal violence against civilians in Iraq this week. A suicide car bombing on a commercial neighborhood in Baghdad killed 23 people on Monday. In Mosul, the organization is currently defending the last neighborhoods of the city that it still controls. Iraqi troops there are approaching the iconic mosque where the group’s leader Abu Bakr al-Baghdadi described himself as the leader of a self-proclaimed Muslim caliphate.

Even ISIS’ own propaganda agents seemed preoccupied with events on the battlefield, rather than with the mayhem a day earlier in London. A statement listing key operations issued by ISIS earlier Thursday made no mention of London. Instead, the bullet pointed graphic listed a series of activities closer to home, including attacks on opposing soldiers in Mosul. 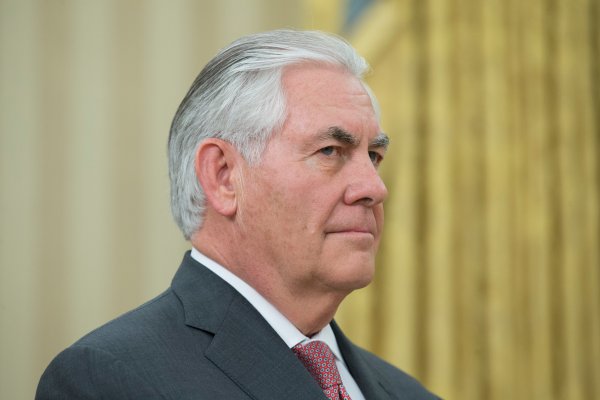 The U.S. Wants More Than 60 Countries to Help Come Up With a Plan to Defeat ISIS
Next Up: Editor's Pick