President Trump invited 15 moderate lawmakers to the White House on Tuesday to persuade them to vote for the Republican bill to replace Obamacare.

The president positioned himself in a large chair by the Oval Office’s fireplace, flanked by House Majority Whip Rep. Steve Scalise and Vice President Mike Pence, and listened to the lawmakers go around in a circle, one by one, and voice their concerns about the legislation.

Some members wanted to remove the provision in the Republican bill that would defund Planned Parenthood. Others had concerns about the cuts in Medicaid spending. Another asked what would happen to the hospitals in his district. Trump nodded and listened, but made no firm promises. He reminded them of the importance of getting the bill passed.

By the time the meeting ended, no one had changed their vote.

“I walked in with reservations. I still have those same reservations,” Rep. Charlie Dent, co-chair of the House Republican’s moderate Tuesday Group, said. On Wednesday night, Dent announced that he would vote against the bill.

The meeting was a snapshot of the challenges Trump has faced in trying to pass his first significant piece of legislation after two months in office.

For Trump, the author of the Art of the Deal and a real estate developer who built his brand on his negotiating skills, health care is proving to be the toughest bargain yet. With just hours before the House of Representatives votes on the Republican replacement for Obamacare, Trump’s entire legislative agenda may hang in the balance.

The President has met privately with wavering members. In closed-door meetings, he has threatened, pleaded with and nudged Republican lawmakers to back the legislation.

Still, the 216-vote threshold for victory is proving elusive for Trump and Speaker of the House Paul Ryan, who have forged a delicate alliance around a carefully sequenced to-do list designed to bring about long-awaited conservative reforms. Should the bill Republicans named the American Health Care Act fail, it could begin the unwinding of their convenient coalition. At the very least it would mark an embarrassing defeat for the president who promised to use his dealmaking skills to make Washington work.

The stakes are so high that the president and his allies have resorted to the same sort of backroom dealing they railed against during the presidential campaign.

“There is no plan B,” White House Press Secretary Sean Spicer said Wednesday. “There is Plan A and Plan A. We’re going to get this done.”

The central conflict in the bill is that conservatives believe the law is too expensive, creating an entitlement program for the poor, and does not go far enough to reform Medicaid, the government-funded low-income insurance program. Meanwhile, moderate Republicans argue the proposed law will hurt lower income and older people, citing figures by the nonpartisan Congressional Budget Office that say 24 million would lose their health insurance under the GOP plan.

Barely 24 hours before the vote, the White House and congressional leadership were still looking for inducements to win over skeptical lawmakers. Already they had accelerated the pace of repealing Medicaid expansion and a host of taxes under Obamacare, and they created a special carve-out to benefit upstate New York counties in a bid to win over moderate Republican members that represent them.

But those changes, announced late Monday, had proven to be insufficient to win over the hard-right House Freedom Caucus, with its members saying they had more than the 21 votes needed to sink the bill.

Late Wednesday, Ryan’s office and the White House were looking to embrace a risky measure pushed by the Freedom Caucus, which would test the scope of congressional rules by repealing some of the regulations in the law, including its provisions for “essential benefits” in insurance plans.

Trump spent much of the night reaching out directly to members on the proposal, as his aides engaged in what the White House termed a “full-court press.”

“The leadership and the President specifically and the Vice President have engaged in a personal way, and a real meaningful way, and tonight is an encouraging night,” Rep. Mark Meadows, the chairman of the Freedom Caucus, said.

“We’re not there yet, but we’re very optimistic that if we work around the clock between now and noon tomorrow that we’re going to be able to hopefully find some common ground,” Meadows added.

Even if the bill passes the House, it will face an even steeper challenge in the Senate, where Republicans can afford only one or two defections. Numerous senators, across the ideological spectrum, have voiced their opposition to the legislation as it is written now. And the incentives to win over rogue House members are likely to pale in comparison to what will be needed in the Senate.

Tackling health care reform never seemed high on Trump’s agenda during the campaign, when he focused on the need for trade, tax, and immigration reforms. His call to repeal and replace Obamacare was always an olive branch to the wary party establishment, so it was little surprise that he took a backseat on crafting the legislation to Ryan. But after some initial skepticism, Trump moved to fully embrace the bill, even suggesting this week he could envision it one day being called “Trumpcare.”

Yet as he continues to travel the country holding campaign rallies, Trump has cast the Obamacare replacement bill as an impediment that must be cleared before he can move forward with his true priorities that he outlined in 2016.

“Nobody knew that health care could be so complicated,” Trump said unironically last month.

Meanwhile, the more moderate Senate Republican conference, led by Majority Leader Mitch McConnell, is setting up an ambitious schedule to amend the law in such a fashion that it can win 51 votes. Those changes, if approved by the Senate, will be hashed out with the House in a conference committee, before going up for a final vote in both chambers — meaning the preening over Thursday’s vote may end up as kabuki theater.

What is clear is that Trump has staked much of his first term on the legislation, by taking the burden of passing the bill into his own hands. “He is the closer,” Spicer said Wednesday.

At times, Trump’s lobbying has succeeded.

On Tuesday, night, he granted a private meeting to Rep. Lou Barletta of Pennsylvania, one of his earliest supporters, before the President’s remarks at the National Republican Congressional Committee’s fundraiser at the National Building Museum in Washington.

Barletta spoke President Trump and Ryan backstage at the event. He told the President he could not vote for the health care bill unless there was a provision to ensure undocumented immigrants will not receive tax subsidies to purchase health insurance.

Trump, Barletta told TIME, was surprised by the loophole, and agreed to support a separate bill to close it. “I asked the President if the would support my bill and he said absolutely he loves it,” said Barletta, who plans to vote for the bill on Thursday.

Meadows, the chair of the Freedom Caucus, and others have cited Trump’s efforts in helping bring them to the table.

But others who have been lobbied by the White House were less ready to say yes. When Pence met with Freedom Caucus members near the White House, he and aides “tried over and over again” to make assurances that the bill would change in the Senate, said Rep. Paul Gosar of Arizona.

Gosar said he was unswayed. “Fool me once, shame on you, fool me twice shame on me,” he said.

Nor did Trump sway Rep. Dan Donovan of New York, who was in the meeting with President Trump on Tuesday and is a longtime friend of the president.

The day after the meeting, Donovan published an op-ed saying that he opposes the bill.

“I look forward to working with the President and my colleagues to get this done right,” he wrote. 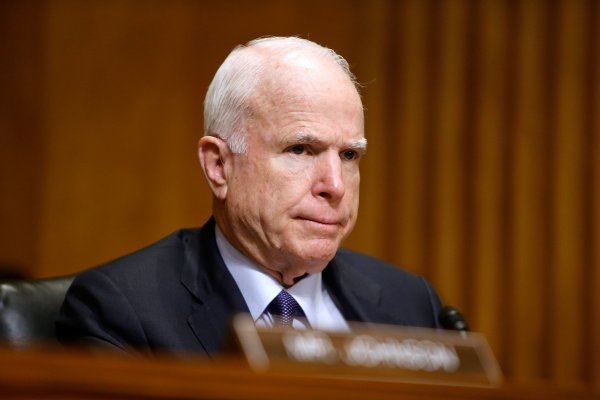