Republican presidential candidate Donald Trump delivers the convocation at the Vines Center on the campus of Liberty University on Jan. 18, 2016 in Lynchburg, Virginia.
Chip Somodevilla/Getty Images
By Katie Reilly

President Donald Trump is going to deliver the commencement address at Liberty University this year — an announcement that divided students on Wednesday at the Christian school.

For some, it was a frustrating example of the school’s continued association with Trump. For others, it was a cause for celebration, an honor to be visited by the President of the United States. (Trump is the first sitting U.S. president to deliver a commencement address at Liberty since George H.W. Bush in 1990.)

“A commencement speaker’s supposed to be a capable, intelligent, respectable figure who students can look up to and aspire to become, and today we live in a world where the President of the United States doesn’t even meet those qualifications,” said Dustin Wahl, a junior at Liberty University who founded Liberty United Against Trump last year.

In October, the student group released a statement criticizing Trump, saying they were “tired of being associated with one of the worst presidential candidates in American history.” Wahl said the statement gained signatures from about 2,000 of Liberty’s 15,000 residential students. Liberty University President Jerry Falwell Jr. was a vocal supporter of Trump throughout the election, welcoming him to speak at the school last year, campaigning on his behalf and defending him after a leaked recording showed Trump boasting about groping women.

Wahl, who identifies as a conservative Republican, said he was disappointed by the news that Trump would speak at commencement, concerned that it “furthers the impression that Liberty University is an anti-intellectual, populist university — which really isn’t the case.” Still, he said he wasn’t surprised.

“A bunch of us have talked about it, kind of whispered about the chance of him giving the commencement here,” Wahl said. “I kind of figured at some point in the next four years he would, because where else would Donald Trump be able to give a commencement and not be met with a great deal of scrutiny?”

But other Liberty University students were pleased with the announcement.

“I think it’s great that I go to a school that invites many influential speakers that all have unique beliefs,” said Whitney Rose, a Liberty senior and Trump supporter who said she’s excited to hear Trump’s message for graduates. “Who wouldn’t be excited to hear from the President of the United States?”

Trump’s politics aside, some students were concerned that his appearance could draw attention away from what should be a celebratory occasion.

Paige Hathaway, a senior at Liberty, said Trump’s selection had already polarized members of her family who plan to attend her graduation.

“My family is going to be split politically, so I’m now going to have to not play graduate, but mediator for my family,” she said. “I’ve already had some family members say, ‘Hey, we’ll see you after. We’re not going to commencement.’ Others have said, ‘We can’t wait to go to commencement.'”

The graduation ceremony at which students receive their diplomas is separate from the commencement ceremony at which Trump will speak. Hathaway said she knows students who are considering skipping Trump’s speech altogether, but she said she’s planning to attend.

“I think I will go, but it will have nothing to do with Trump speaking,” she said, before explaining her mindset: “Listen, I earned this regardless of whether or not you’re speaking. I’m going to be here because I feel like I have the right to be, but I’m not going to enjoy you talking.” 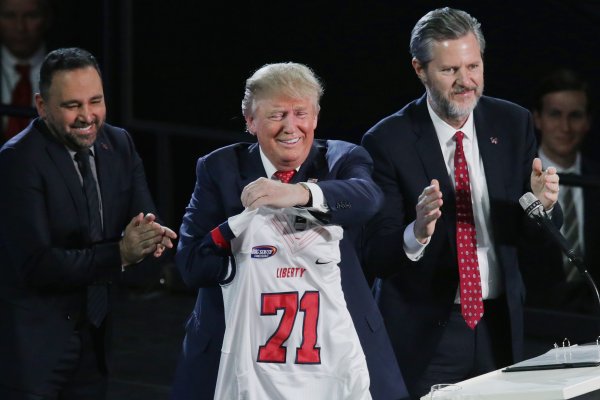 Trump Will Give Commencement Speech at Liberty University
Next Up: Editor's Pick