Supreme Court nominee Neil Gorsuch has faced some tough questions on his background and his views on the law at Senate confirmation hearings this week.

But not all the questions have been tough.

Some Republicans on the Senate Judiciary Committee had softball questions for President Donald Trump’s nominee. When Republican Sen. Chuck Grassley of Iowa, who heads the committee, asked if Gorsuch would “have any trouble” ruling against Trump, Gorsuch even responded “That’s a softball, Mr. Chairman.”

Here’s a look at some of the easiest questions Gorsuch faced this week.

“Have you ever held a position as a member of Congress?”
-Republican Sen. Mike Lee of Utah, making a rhetorical point

“Does a good judge decide who should win and then work backward to try to justify the outcome?”
-Republican Sen. John Cornyn of Texas. (“That’s the easiest question of the day,” Gorsuch responded.)

“What’s the largest trout you ever caught?”
-Republican Sen. Jeff Flake of Arizona

“Would you tell me where your favorite fishing stream is?”
-Republican Sen. Mike Crapo of Idaho

“My son Dalen, teenager, said ask him if he would rather fight 100 duck-sized horses or one horse-sized duck?”
-Flake, referencing a common question asked on Reddit forums

“What is the answer to the ultimate question of life, the universe, and everything?”
-Republican Sen. Ted Cruz of Texas, referencing a famous line from one of Gorsuch’s favorite books, The Hitchhiker’s Guide to the Galaxy. (The answer, which Gorsuch correctly gave, is “42.”)

“So, my wife also sent me a text a little bit ago and said — and I’m sure she didn’t expect me to read it, but —how in the world is Gorsuch able to go so many hours at a time without peeing?”
-Republican Sen. Ben Sasse of Nebraska 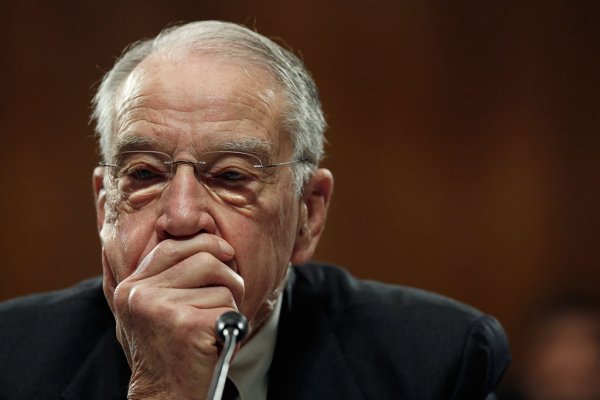 Chuck Grassley Will Leave the Neil Gorsuch Confirmation Hearing Early to Make His Bedtime
Next Up: Editor's Pick