Jenny Slate Addresses Her Relationship and Breakup With Chris Evans

When Jenny Slate and Chris Evans began dating during the summer of 2016, there was plenty of buzz about the conscious coupling of the comedian and the Captain America star. However, it turns out that the public scrutiny was part of the reason why the pair called it quits earlier this year.

In an interview with Vulture, Slate divulged that while she and Evans shared similar backgrounds and interests, public reactions to their relationship highlighted how different their lives were.

“If you are a woman who really cares about her freedom, her rights, her sense of being an individual, it is confusing to go out with one of the most objectified people in the entire world,” she said. “I’m considered some sort of alternative option, even though I know I’m a majorly vibrant sexual being.”

Evans’ level of fame as an action star of a major movie franchise also affected the level of privacy that the former couple could have.

“For him to go to a restaurant is totally different than for me to go,” she said. “I sit in my window and I say ‘Hi’ to people on the street. I have more freedom because I’m not Captain America. I’m mostly a cartoon.”

Slate maintains that she doesn’t regret her time with Evans, even though they haven’t been spending a lot of time together since the split.

“We’re not on bad terms, but we haven’t really seen each other, spoken a lot,” she says. “I think it’s probably best. I’d love to be his friend one day, but we threw down pretty hard. No regrets, though. Ever.” 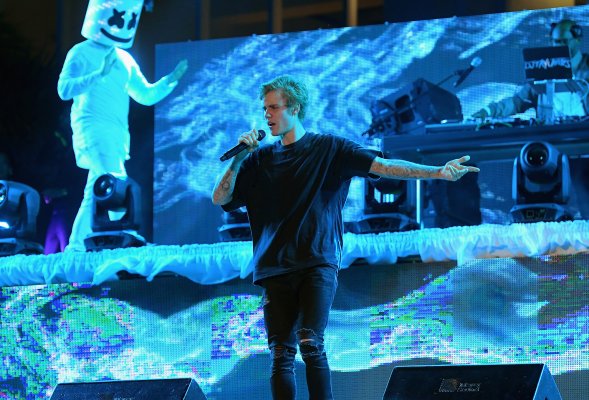 Justin Bieber Showed Off His New Chest Tattoo By Dancing Shirtless With This Woman
Next Up: Editor's Pick