Writer Jimmy Breslin smokes a cigar outside the Madison Hotel in Washington, D.C. on Aug. 29, 1973.
Ellsworth Davis—The Washington Post/Getty Images
Ideas
By Gil Troy
Troy is a professor of history at McGill University and the author of The Age of Clinton: America in the 1990s.

A novelist plotting today’s absurdities — rather than an historian trying to understand them — would have the truth-telling, tough-talking Queens-born columnist Jimmy Breslin die from apoplexy — not old age — as the Trump Era began. Both Breslin, who died March 19, and President Donald Trump were born in Queens, the wannabe borough, the borough where Manhattanites get stuck in traffic as their cab is going to the airport or their hearse is going to the cemetery. But while Trump represents Queens as grasping, aggressive and grating, Breslin represented Queens as authentic, ethnic and expansive. Trump ignores his Queens roots without transcending them; Breslin transcended his Queens roots without forgetting them. Trump is the kid from Queens masquerading as the Manhattan mogul, while Breslin was the kid from Queens seeing through the fancy-pants New Yorkers’ New Clothes (and parvenu airs).

Yes, Queens, which should be enjoying its first presidential moment, is not really talking about it, nor does the President delight in his borough of origin. When Jimmy Carter was elected President in 1976, you would have thought Plains, Georgia, had 2.36 million people not 236, while Hope, Arkansas, enjoyed a similarly hyped moment in 1992, thanks to Bill Clinton. Today, a plaque in Hyde Park, Chicago, marks just where Barack Obama kissed Michelle Robinson after their first date at Baskin-Robbins — and Hyde Park residents boast about the couple that chose not to return there. But with Trump having earned only 22 percent of the vote in this most ethnically diverse borough, most Queens people treat Trump as coming from “the City,” which is what we call the real New York, Manhattan.

Of course, Jimmy Breslin and Donald Trump came from different Queenses. Breslin grew up in Richmond Hill-Ozone Park, neighborhoods whose names once evoked Breslin’s beloved working class Irish and Italian toughs. The name of Trump’s neighborhood — Jamaica Estates — confirms his cushier background. Yet geography often transcends class for kids from Queens. I, for one, call my own boyhood neighborhood “Queens Village” when I play the rags-to-riches American Dream card, but we usually called it “Hollis Hills” — our little middle-class enclave broadcasting its own pretensions.

Trump’s Queens origins helps explain his political rise, this Richie Rich’s abilities to tap working class white resentments so effectively. Every kid from Queens is born with a chip on his shoulder the size of Trump Place (now Riverside South). It lasts, even if we move on up to the East Side, to what George Jefferson (a television character who left Queens) called “a de-luxe apartment in the sky” topping a tower we built and named for ourselves on Fifth Avenue.

Breslin nailed Trump’s outer-borough insecurity in 1989, branding him “Between you and I” Trump. Breslin explained that Trump’s grammatical mistake reflected his unrealized aspirations, because “Between you and I,” sounds “tonier” than the correct “you and me.” Breslin, who mastered Queens’ street-talk and the Queen’s English, specialized in seeing through the pretenses of high-fliers like Trump.

Breslin’s riffs, like Trump’s, echoed every Queens kid’s wackiest uncle holding court in his favorite diner or deli. But Breslin turned the patois into art, while Trump keeps it superficial — or descends into trash-talk. Similarly, Breslin shared Trump’s hair-trigger hypersensitivity to criticism and occasional anger-management issues — honed at Queens’ fender-benders. But Breslin’s famous rage produced pearls like the line “designed by architects with honorable intentions but hands of palsy,” while Trump’s tantrums spew clichés like “total disaster.” And yes, while Breslin, like Trump, had a touch of Archie Bunker, Breslin, like this most famous Queens TV character at his best, refused to be imprisoned by resentments and could overcome them.

In fact, Jimmy Breslin tapped his resentments to empathize with others. Tragically, Trump stays stuck in his own hates, tending them like prized pets. Of course, today’s Queens is not the Queens into which Jimmy Breslin or Donald Trump was born. It is, what Queens mothers once called “a regular United Nations.”

Breslin welcomed these immigrants — defending them when necessary, as with his book The Short Sweet Dream of Eduardo Gutierrez, investigating the construction accident that killed a Mexican immigrant. Breslin knew that the new kids from Queens — and their parents — are the ones who make the city work, and they will be the ones who will make a future America soar. Donald Trump still needs to learn that these are the people who can help make America “great” — just as Jimmy Breslin’s words and passion did.

Gil Troy, a graduate of Jamaica High School — whose alumni include an Attorney General who was jailed, John Mitchell and the stinker who moved the Dodgers from Brooklyn to Los Angeles, Walter O’Malley — is the author of eleven books on American history. 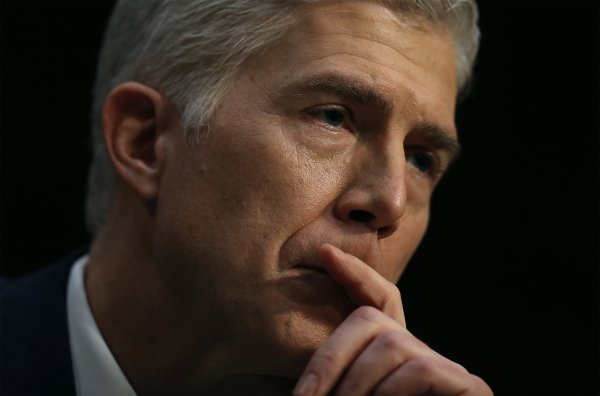 My Name Is on the SCOTUS Gay Marriage Ruling and Neil Gorsuch Alarms Me
Next Up: Editor's Pick