President Trump’s revised travel ban has been blocked by two federal judges, with Trump’s own rhetoric coming back to undermine what has been one of the signature policy efforts of his first 100 days. The new ban, which replaced the one he introduced in January that caused chaos at airports and sparked protest and outrage from even some Republicans, blocks visas from six Muslim-majority countries and suspends U.S. refugee admissions. The executive order, which was signed last week, was set to take effect Thursday after a 10-day implementation period designed to prevent some of the scenes of unrest from the first order. The Trump Administration took steps to craft the new order around the legal potholes that bedeviled the first, by adding explicit carve-outs for U.S. green card holders, those who have already been admitted as refugees, and dual passport holders, among others. But two judges said efforts to block even the new order on the grounds that it was discriminatory to Muslims showed merit—the travel ban stemmed from Trump’s campaign pledge to institute a ban on Muslim immigration—and pointed to rhetoric from Trump and senior aide Stephen Miller suggesting that the latest ban was designed to have the same policy effect.

“This ruling makes us look weak,” Trump complained at a campaign rally Wednesday night, just hours after the first federal judge in Hawaii blocked his order. And while Trump is not the first president to have a court block his executive order, that his revised one was also blocked is yet another failure for his Administration.

The House continues its efforts on passing the American Health Care Act, its replacement for Obamacare, with the budget committee set to mark up the bill Thursday. Cajoling by the Administration and House leadership is showing some promise, as the legislation now seems to have a path to passing the House. But there is growing consensus that the AHCA will be significantly amended if it is to pass the Senate, even after a “manager’s amendment” provides some fixes. Leadership is also working to expedite the “Phase 3” plan—legislation that needs 60 votes in the Senate—as a way to win over conservatives, but the prospects of meeting that vote threshold are slim.

The Trump Administration released its budget blueprint for fiscal year 2018 Thursday morning, outlining massive cuts to many federal agencies to pay for a boost to defense and immigration enforcement spending. The document seeks to further the White House’s efforts against the “administrative state” and would eliminate funding entirely for independent agencies like: the Appalachian Regional Commission; the Chemical Safety Board, the Corporation for National and Community Service, the Corporation for Public Broadcasting, the Legal Services Corporation, the National Endowment for the Arts, the National Endowment for the Humanities, the Neighborhood Reinvestment Corporation, the Overseas Private Investment Corporation, the United States Institute of Peace, the United States Interagency Council on Homelessness and the Woodrow Wilson International Center for Scholars.

Trump’s budget is already facing stiff criticism on Capitol Hill, where his desire to target foreign aid and to defund some clean water programs is drawing opposition from even some Republicans. Presidential budgets are never adopted without significant change, and are often ignored altogether by congressional budgeters and appropriators. But they are still an important signpost in communicating a president’s priorities, both to the American people and lawmakers on Capitol Hill.

“I’m, in a little way, I’m an arbitrator. … We got a lot of fighting going on.” — President Trump to Fox News on his role in pushing the GOP healthcare plan 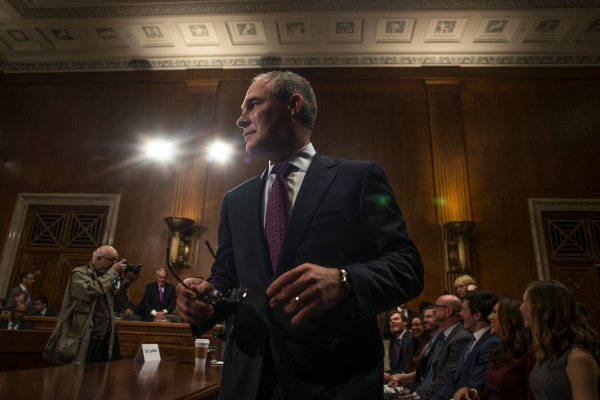 Why Republicans Are Embracing Climate Change
Next Up: Editor's Pick