As the fallout from the assassination of Kim Jong Nam continues, more details are emerging about what sparked his murder, with possibly grave consequences for other members of North Korea’s ruling family.

On Tuesday, North Korea banned Malaysian diplomats from leaving North Korea in response to the investigation into the death of Kim Jong Nam, Supreme Leader Kim Jong Un’s half-brother, who police say was poisoned with VX nerve agent at Kuala Lumpur International Airport on Feb. 13. The North Korean embassy has slammed the probe as “political.”

A source close to the North Korean regime tells TIME that Ministry of State Security (MSS) officials met with Kim Jong Nam in Malaysia in a bid to persuade him to return home to Pyongyang with his family. This intervention was apparently spurred after officials learned that the 45-year-old had been repeatedly approached about leading a government-in-exile.

This version of events is supported by Kim Joo Il, a North Korean defector living in the U.K. who set up the International North Korean Association for Human Rights and Democracy. He tells TIME that he made three approaches to Kim Jong Nam about establishing an alternative government.

“The last time we contacted him was in June 2016 … in Singapore,” says Kim Joo Il via email. “He again rejected our proposal but with more detailed reasons [than previously]. He said: ‘I am really not interested in politics in North Korea. However, I am against North Korea’s third hereditary succession and I am one of those who want North Korea to open up and reform.’”

Kim Joo Il says that he doesn’t know for certain why Kim Jong Nam was killed, though he “think[s] that it is because the confidential information that he had contact with North Korean refugees regarding a government-in-exile had been leaked.”

Kim Jong Nam was especially threatening to the regime because his status as a member of the Kim dynasty — the so-called Baekdu bloodline, named after the fabled mountain considered the birthplace of the Korean people — would give a vital boost to any alternative government.

Unsurprisingly other direct descendants of North Korea’s communist founder Kim Il Sung are now looking over their shoulders. Most prominent among these is Kim Pyong Il, half-brother to Kim Jong Un’s father, former leader Kim Jong Il. The 62-year-old has served as the Pyongyang’s ambassador to the Czech Republic since 2015, after performing the same role in Poland for 16 years.

Kim Pyong Il has reportedly spent 38 years outside his homeland in all, following a power struggle with his elder half-sibling. He apparently remains popular in the country owing to a resemblance to Kim Il Sung, still much revered as the “Sun of the Nation.”

South Korean media reports that an MSS delegation has been dispatched to Prague to keep a close watch on Kim Pyong Il, while TIME’s own regime source says he has in fact already been summoned back to Pyongyang. Although Kim Pyong Il remains ostensibly close to the regime, and never criticized it in even the mild manner that Kim Jong Nam did on occasion, his family credentials make him both a valuable and dangerous commodity.

“We do have a plan to contact Kim Pyong Il … regarding the government-in-exile,” says Kim Joo Il.

Another possible target would be Kim Jong Nam’s eldest son, 22-year-old Kim Han Sol, who is reportedly a student in Eastern Europe. He has previously appeared on social media criticizing the regime of his uncle and has a reputation as intelligent and erudite. His whereabouts following the death of his father have not been confirmed.

Two women — Siti Aisyah, 25, from Indonesia; Doan Thi Huong, 28 from Vietnam — have been charged with Kim Jong Nam’s murder after CCTV footage allegedly shows them wiping his face with what may have been a toxin-soaked cloth. He immediately fell ill and died en route to hospital.

In total, eight North Koreans have been named in connection with the investigation, though Malaysian police say four fled the country immediately after the attack, and the only one to have been detained has now been released for lack of evidence.

The death of Kim Jong Nam comes at a time when Pyongyang is ramping up missile tests in its bid to develop a nuclear-armed ballistic missile capable of hitting the U.S. mainland. Four rockets were launched into the sea by Japan on Monday, while another was tested just the day before Kim Jong Nam’s assassination.

Commentators are split over what the recent flurry of action indicates about Kim Jong Un’s position. “This has every indication of playing to a regime that is very stable,” says Ken Gause, a Korea expert at the Center for Naval Analyses, a nonprofit research and analysis organization located in Arlington, Va.

Kim Joo Il disagrees, saying the regime is on the “verge of collapse.”

“We believe it is just Kim Jong Un’s last-ditch effort,” he says. “Since Kim Jong Un came to the power, the regime has started to crumble.” 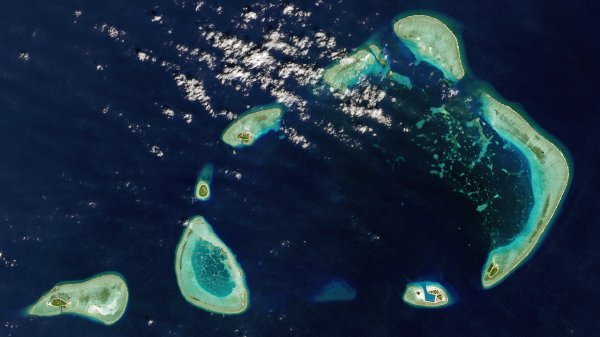 Chinese Authorities Want to Fly Tourists to Disputed Islands
Next Up: Editor's Pick