Congress Can Remove Donald Trump From Office Without Impeaching Him

US President Donald Trump walks from Marine One to the White House February 24, 2017 in Washington, DC.
Brendan Smialowski—AFP/Getty Images
Ideas
By Samuel Breidbart and Vinay Nayak

Breidbart and Nayak are students at Yale Law School.

Presidential psychology is quickly becoming a bipartisan issue. Recently, Senator Al Franken said that he and several of his GOP colleagues shared the opinion that President Donald Trump is “not right mentally.” Shortly thereafter, 35 mental health professionals — psychiatrists, psychologists and social workers — took to the pages of the New York Times to register their own concerns that the President was demonstrating “grave emotional instability.”

These controversial armchair diagnoses are powerless on their own. But what if there was something that Senator Franken and his concerned colleagues could actually do? Constitutionally speaking, there might be.

Much has been written in recent weeks about a provision in Section 4 of the 25th Amendment that allows the Vice President and a majority of the Cabinet to send a letter to Congress stating that the President is “unable to discharge the powers and duties of his office.” This letter would immediately initiate a transfer of power to the Vice President, subject to additional Congressional review.

While theoretically possible, it is highly unlikely that the Vice President and the Cabinet would unite to remove the President absent a clear incapacitation along the lines President Woodrow Wilson experienced after a stroke. Even if there was a bipartisan consensus that he was unfit to serve, the President would have broad authority to remove his Cabinet before it could take any action.

But there is another provision in the Amendment that has received much less popular attention — one that could allow Congress to play a role in removing the President. And no, it isn’t impeachment. Instead, a little-known provision in Section 4 empowers Congress to form its own body to evaluate the President’s fitness for office, eliminating the need for the Cabinet’s involvement in the process (emphasis ours):

But what constitutional constraints are put on this power? Remarkably, there aren’t any. The framers of the 25th Amendment left the provision purposely vague, allowing Congress flexibility to decide on its specifics at a later date. It should come as no surprise to those who bemoan Congress’s frequent inactivity to find out that in the 50 years since the Amendment passed, it has never made such a decision.

However, there are two ways that Congress could still act on this provision.

The first approach would be to appoint a panel of independent medical practitioners to judge the health of American presidents. Former president Jimmy Carter has been a strong advocate for this approach, noting the advanced age and poor health of many U.S. presidents. Since the 1990s, Carter has expressed particular concern about the conflict of interests faced by the personal physicians to the President, who might otherwise be tasked with making a determination about medical fitness. These physicians often have personal relationships with the presidents they treat. (Carter’s was his tennis partner.) This seems to be the case with President Trump, whose own personal physician, Dr. Harold Bornstein, famously wrote a bizarre four-paragraph letter raving about Trump’s “astonishingly excellent” health. He later said that he wrote this letter in five minutes while riding in a limousine paid for by Trump himself.

A second approach would be for Congress to appoint a body with no medical expertise whatsoever. Because the 25th Amendment does not require a medical diagnosis or consultation with medical professionals, Congress could even appoint members of its own ranks to the panel. This approach could give Congress the ability to enforce its own criteria for presidential fitness. For example, Congress could deem the President “unable to discharge the powers and duties of his office” if he is unable to be trusted with classified information by intelligence agencies. Congress could even use the threat of removal to exercise additional leverage over the President’s actions.

This approach would raise grave constitutional and moral questions about the proper role of Congress in our democracy. Moreover, in addition to sign-off from the Vice President, this path would likely require supermajorities in both houses of Congress to override a presidential veto, further underscoring the improbability of such a move.

Despite the long odds, President Trump’s erratic behavior in recent weeks has led many — including constitutional scholar and Harvard Law Professor Laurence Tribe — to start talking about whether the President is fit to discharge the duties of his office under the meaning of the 25th Amendment. While such conversations may be premature, it is important to understand the constitutional mechanisms that would allow removal of a president if a broad bipartisan consensus emerges that he or she is unable to lead our nation.

In the heat of the 2016 Presidential campaign, Donald Trump’s physician assured the American people that his 70-year old patient would be “the healthiest individual ever elected to the presidency.” Congress might have a different opinion. 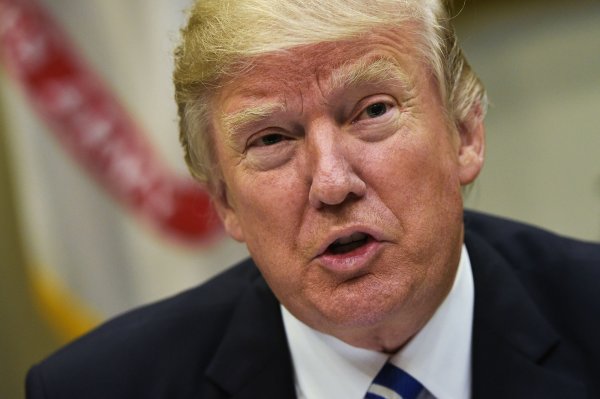 The 2 Faces of Trump: President and Provocateur
Next Up: Editor's Pick