Sunayana Dumala, wife of the Indian engineer, Srinivas Kuchibhotla, who was shot dead in a Kansas bar, is consoled by family members at his funeral in Hyderabad on Feb. 28, 2017.
Noah Seelam—AFP/Getty Images
Ideas
By Tara Raghuveer
Raghuveer is the deputy director at the National Partnership for New Americans.

I woke up on Thursday, Feb. 23, to a text from my mom: “Be very careful. Avoid conflicts.” She’d sent it to my dad and me, and she linked to an article about a hate crime in Kansas.

On the night of Feb. 22, a white man shot two Indian men at a bar in Olathe, just outside Kansas City. According to witnesses, the shooter had mistaken them for Middle Easterners and began shouting slurs until he was kicked out. He returned later with a gun. He killed Srinivas Kuchibhotla and injured his friend, Alok Madasani. Ian Grillot, a white man who tried to intervene, was also hospitalized.

I’m an Indian immigrant. I grew up in Kansas City. My family moved there in 2001. I remember talking about 9/11 with my fourth-grade class. We sat cross-legged, in a circle; I was the only brown person in the room. I look back on pictures of the high school cross-country team and notice that my knobby brown knees stand out in a crowd of white runners. Though I was aware of the color of my skin, I can’t recall feeling alienated because of my race. I loved my childhood in Kansas. I had friends, neighbors and teachers who welcomed my family and me.

I was lucky. Layers and layers of privilege have shielded my family from the hate that has existed in America since well before Trump’s election. I arrived in this country when I was 3 and have never known another home. My parents are doctors, and they grew up speaking English in Catholic schools in India, so they don’t have thick accents. Maybe because of these factors, we were never the targets of racist attacks.

Kuchibhotla’s shooting devastated me. After Kuchibhotla’s widow, Sunayana Dulama, delivered a tearful tribute last week, I watched the video and wept. The bar where the shooting occurred is just 20 minutes from my childhood home. It’s even closer to my uncle, who shares Kuchibhotla’s first name. It affected people who look like me, who have jobs like my parents’ — in my hometown.

Kuchibhotla had been an engineer at Garmin. Dumala said her late husband was passionate about his work and dreamed of innovating in the aviation industry. They were educated in India but planned a long life in Kansas. Together they built their dream home. He painted it and installed the garage door.

Kuchibhotla’s death matters. And not only because he was an engineer with a promising future. We must fight our instincts, in moments of tragedy, to render victims exceptional. Kuchibhotla’s death matters because he was a human being with dreams, just as we all are. He deserved dignity, just as cab drivers and migrant farm workers and housekeepers and those still seeking work do. Kuchibhotla’s life, like every immigrant’s life, is more than potential economic contributions.

Until his speech to Congress, Trump spent six days deafeningly silent on Kuchibhotla’s death. He finally said, “While we may be a nation divided on policies, we are a country that stands united in condemning hate and evil in all its forms.” He did not say Srinivas Kuchibhotla’s name.

We cannot afford to be fooled. Trump has already taken measures to construct a wall along our southern border, gut the refugee program, punish Muslim immigrants and travelers, and tear apart families to enforce immigration laws. These “America First” policies do not condemn hate; they authorize it.

The truth is, Kuchibhotla and immigrants like him would likely make it into the U.S. under a system like the one Trump described in the speech as “merit-based” and only for immigrants who can “support themselves financially.” But does it matter if, when they arrive, their lives are ended by the hateful America that Trump enables?

Hate is blind to nuance. It bears repeating: the shooter allegedly believed Kuchibhotla and Madasani were Middle Eastern. They weren’t, but for someone emboldened by intolerance and wielding a gun, the facts were irrelevant. Similarly, it does not serve us to talk about immigrants like Kuchibhotla as distinct from black and Latino immigrants who are consistently criminalized by an arbitrary and failing justice system. My mom’s text to me was the first of its kind — but black and other brown families have had to warn their kids to “avoid conflict” for centuries.

On Tuesday, Kuchibhotla’s widow posted about her husband on Facebook. She concluded with a string of questions, including: “DO WE BELONG HERE? Is this the same country we dreamed of and is it still secure to raise our families and children here?”

Srinivas Kuchibhotla. Say his name. People like him and unlike him — black, brown, immigrants, refugees, Muslims, cab drivers, farm workers, housekeepers, those still finding their way — do belong here. Their lives are worth more than the sum of their taxes. They deserve to be welcomed and protected. We must fight for their humanity. 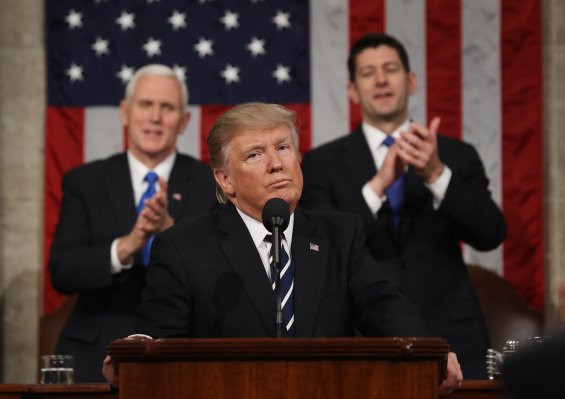 Concern Over Trump's Plan to Highlight Immigrant Crime
Next Up: Editor's Pick