Review: The Reimagined Beauty and the Beast Is Wild, Vivid and Crazy-Beautiful

The key to Bill Condon’s wondrous live-action musical Beauty and the Beast is that it’s not a movie of its time. It’s not even a movie of 1991, the year Disney released the animated film that provides its framework. In its go-for-broke exuberance and wedding-cake lavishness, this new Beauty most resembles the musicals of the mid- to late 1960s, works like Carol Reed’s Oliver! or the Rodgers and Hammerstein made-for-TV Cinderella, whose star, Lesley Ann Warren, became Cinderella for every kid who saw her. Those projects came to life as the era of the great movie musical was waning, but they were filled with color and bravado, not to mention dozens—if not hundreds—of people essentially proclaiming, “We’re dancing! We’re singing! Loudly! With a big orchestra behind us!” These unapologetically bold entertainments, worlds apart from era-defining pictures like Bonnie and Clyde and The Graduate, were daring in their own feisty way. They were marvelous not in spite of the fact that they were out of step with the times, but because of it.

This Beauty and the Beast is out of step, beautifully, in the same way. There’s no need to worry that this version might crush the gentle charms of the 1991 picture: Even though Condon more or less faithfully follows that movie’s plot, this Beauty is its own resplendent creature. Emma Watson stars as Belle, a bookish loner who longs to escape small-town France, but who instead becomes the prisoner of the cursed neighborhood beastie. Beneath shaggy, olive-brown fur and a set of spiraling, sinister horns, the Beast is played—largely via that double-edged sword of modern movie technology known as motion capture—by English actor Dan Stevens. Kevin Kline is Belle’s father, Maurice, an artist, a tinkerer and a man who will always be in love with his late wife, Belle’s mother. He brings warmth and style to the role, without ever letting it descend into the horrid territory known as “heartwarming.” And Luke Evans is the swaggering braggart Gaston, a brute who will have Belle at all costs—Evans’ performance is oversized, like his shoulders, and comes with a wink.

The original songs, by Alan Menken and the late Howard Ashman, remain, though the arrangements are now more like lush floral bouquets, laced with grand orchestral curlicues. (The film also features three new numbers by Menken and lyricist Tim Rice.) In fact, nearly everything about Beauty and the Beast is larger than life, to the point that watching it can be a little overwhelming. But Condon knows what he’s doing. He has directed musicals before, like Dreamgirls, but his real calling card is the more recent one-two punch of The Twilight Saga: Breaking Dawn, the final two movies in that franchise. Both entries, but particularly Part I, were campy-crazy and passionately over the top, more like dramatic re-enactments of how people felt about the Twilight books than strict adaptations.

Beauty and the Beast may work in a similar mode—it’s loaded with feeling, almost like a brash interpretive dance expressing the passion and elation little girls (and some boys, too) must have felt upon seeing the earlier version. The production design is elaborate and trippy: The dark, sad part of the Beast’s castle is a Goth-rococo reverie, a moody interior landscape of undulating carvings of stags and hunting dogs, serpents and gargoyles. The guest room that becomes Belle’s—presided over by a singing armoire, whose soaring voice belongs to Audra McDonald—has been lifted straight from a Fragonard painting, a maiden’s dream boudoir rendered in blue, gold and cream.

You could accuse Beauty and the Beast of being a little too generous in doling out sensory overload. But then, it did spring from a movie that featured a motherly singing teapot, a Maurice Chevalier-esque candelabra, and a persnickety clock who does everything by the rules. (Here, they’re voiced by Emma Thompson, Ewan McGregor and Ian McKellan.) The grand musical number, “Be Our Guest,” in which all of these characters—plus plates, silverware and more—bounce and jump and sing in majestically syncopated madness, is probably way too much. But how about those napkins, undulating and writhing in the air like enthusiastic Martha Graham understudies? Somebody had to dream that up. The human mind is truly a miracle.

MORE Here Are All of Disney’s Upcoming Live-Action Movies

The human heart is, too, and Beauty and the Beast doesn’t fail us on that score. Watson is a sturdy, no-nonsense Belle. In one quietly extraordinary moment, she hatches a plan to save the endangered Beast, with whom she has slowly fallen in love. When she outlines the scheme to her father, he says, solemnly, “It’s dangerous.” She looks at him directly and says, “Yes. Yes it is.” There’s no malarkey about bravery here—Belle knows there can be no courage without fear. And when her Beast looks at her with his anguished eyes, he speaks the wordless truth about this most adult of all romantic fairytales. Beauty and the Beast is unlike so much princess-centric lore in that the woman does the work of saving the man, not the other way around. It’s also piercingly explicit about the unpredictability of love, the way it sneaks up on us unbidden. That idea is summarized neatly—yet confoundingly—in a line from one of the songs: “There may be something there that wasn’t there before.” The line is both a riddle and an answer. If you’re old enough to have heard it for the first time in 1991, it almost certainly means something new to you now. 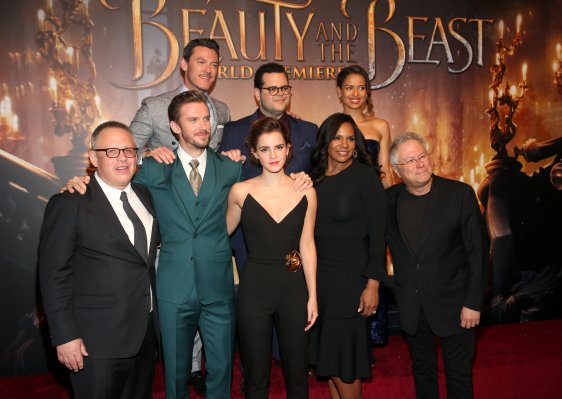 Alabama Movie Theater Bans Beauty and the Beast
Next Up: Editor's Pick