All the Emotions of That Best Picture Mixup in 4 Pictures

The shocking end to the Oscars elicited a range of emotions—from confusion to celebration—within seconds. Moonlight took home the award for Best Picture, even though La La Land was mistakenly announced as the winner. Pictures of those onstage reacting to the flub encompassed how many viewers at home felt after producer Jordan Horowitz broke the news that Moonlight was the real winner.

It began with Warren Beatty’s confusion. The actor, who was presenting the award for Best Picture along with his Bonnie and Clyde co-star Faye Dunaway, opened the red envelope that was supposed to say Moonlight only to see that it said Emma Stone, who had just won Best Actress for her role in La La Land. He paused, confused, and Dunaway read out the incorrect name.

Like everyone watching in the audience and at home, Emma Stone exclaimed, “Oh my God,” upon realizing what had happened.

Ryan Gosling appeared to find the whole thing pretty funny—perhaps like many moviegoers who hoped Moonlight would win in the first place.

Finally, the surprise and joy of Moonlight‘s cast and crew captured the surprising twist of the way the Oscars unfolded.

The cast and crew of Moonlight react after they won the Best Picture Oscar, on Feb. 26, 2017 in Hollywood, Calif.
Mark Ralston—AFP/Getty Images
More Must-Read Stories From TIME
Subscribe to TIME 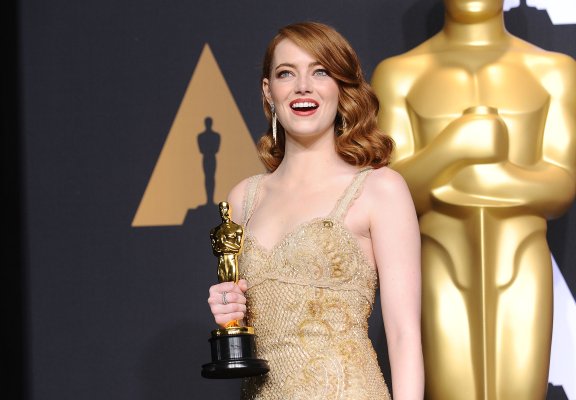 Emma Stone Says She was Holding Best Actress Envelope During the Best Picture Mix-Up
Next Up: Editor's Pick