ABC’s When We Rise Isn’t Subtle. That’s Why It Works.

The specific sort of thing that ABC’s When We Rise is—the sprawling and lavishly emotional broadcast-TV miniseries—feels like a dispatch from a different age. Sure, the miniseries able to take big swings in a short run has conquered TV in the age of Fargo, Big Little Lies and The People v. O.J. Simpson, but When We Rise has little in common with these. The points it makes about gay rights and intersectionality are hammered with the didactic tone of a professor unhappy with his students not having done the reading. Under normal circumstances, I’d probably tepidly note that its messages are well-meant but the product might be worth sitting out.

But these are not ordinary times for TV or for any other endeavor. The medium is only starting to figure out how to respond to the rolling back of rights that’s already begun, with live awards-show speeches making uncertain and varyingly successful attempts at addressing the news and announcements that the Trump presidency will be addressed both directly and obliquely. ABC’s head of entertainment, Channing Dungey, has said she hopes to refocus her network on “the true realities of what life is like for everyday Americans.”

With this in mind, When We Rise (airing in four parts beginning Feb. 27), which was well underway before last year’s election, feels particularly urgent. It follows a group of Americans who are as everyday as it gets—not the high-flying gay mafiosi of Will & Grace but protesters and organizers who struggle to make themselves heard. Guy Pearce stars as Cleve Jones, the real-life civil rights figure whose fight moves from the Harvey Milk era to the fight against AIDS to the election of Barack Obama and simultaneous passage of California’s Proposition 8. He’s heartened and yet saddened by the post-Ellen, post-Will & Grace apathy of young gay men and women, who’ve never had to fight, up until he takes part in the series’s culminating, invigorating battle for gay marriage equality. His battle—intercut with ones undertaken by Michael Kenneth Williams’s Ken Jones, a black community organizer whose struggle is studded with yet more pain, and Mary Louise Parker’s radical Roma Guy—is one that will seem familiar to viewers uncertain that their protest work will be heard and hopeful all the same.

When We Rise, in many moments, has all the nuance of a slogan on a marcher’s sign. Its performances are strong across the board but its writing pushes toward the sort of obviousness familiar from past eras of TV. “Your summer of love turned into a winter of heroin a long time ago,” a San Francisco junkie tells young Cleve, indicating to him that gay solidarity is in retreat. “It’s kind of like we’re family already,” Roma muses of her child’s gay father, realizing all at once that the lesbian- and gay-rights struggles are one and the same. It’s all done with the plainspokenness of a writer afraid to lose the audience anywhere along the way.

But marcher’s signs tend to have an impact, and When We Rise‘s obvious may be a different sort of retro—dating back to a time in which civil rights battles felt far less settled than they have seemed recently. And the show’s insistence on featuring stories that diverge from that of its white male protagonist, on featuring all the different sorts of people who came together to form a movement, stuck in my memory more than hackneyed lines. The miniseries writer Dustin Lance Black’s previously best-known work, the film Milk, is better remembered today as part of a movement toward gay representation in the media than it is for its brilliance as a film. And on that level, it was a success. When We Rise may be remembered much the same way.

With that said, its intended audience seems slightly more self-selecting even than Black’s art-house film: To sit down and watch eight hours’ worth of miniseries implies some openness to the subject matter. The show seems directed less at out-and-out homophobes than for those who see aspects of the LGBTQ rights struggle—at the moment, the thorny issue of transgender citizens’ rights to public restrooms—as extraneous. Its closing message, onscreen, reads “One struggle. One fight,” urging viewers to fight for all citizens’ rights. As a broadcast with a message so urgent that it discards the adornments of sophisticated TV, When We Rise succeeds. As television directed at social ills that’s unafraid to seem unstylish in its pursuit of its own case, it’s likelier to seem more and more “everyday” as time goes by. 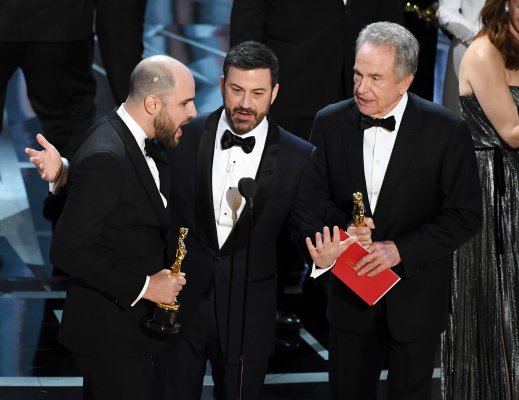 Why the Oscars Mix-Up Matters
Next Up: Editor's Pick