Hours after President Trump told conservative activists Friday that he planned to “do something” about unfair press coverage, the White House broke with tradition by limiting access to the daily briefing by Press Secretary Sean Spicer.

Reporters for CNN, Politico, the New York Times and other outlets were barred from entry to an off-camera but usually on-the-record briefing, called a gaggle, in Spicer’s office. The daily briefing is normally open to all credentialed reporters when the President is not traveling, whether the event happens on-camera in the White House Briefing Room or off-camera elsewhere.

The White House Correspondents’ Association, a group that represents credentialed reporters, promptly denounced the move. “The WHCA board is protesting strongly against how today’s gaggle is being handled by the White House,” said board president Jeff Mason of Reuters. “We encourage the organizations that were allowed in to share the material with others in the press corps who were not. The board will be discussing this further with White House staff.”

Two other members of the board, TIME correspondent Zeke Miller and Julie Pace of the Associated Press, emailed these concerns to Spicer prior to the briefing. They both declined to attend Friday’s briefing when the concerns of the board were not addressed.

Shortly after the briefing was concluded, reporters in attendance transcribed and circulated Spicer’s comments to the entire White House press corps.

In 2009, top Obama Administration officials declared that Fox News was not a news organization because of opinions often aired by the network that were sharply critical of Obama’s policies. At one point that same year, the Treasury Department declined to invite Fox News, but not other networks, to a briefing, prompting complaints from other news organizations. The Obama White House later said the omission of Fox had been made for logistical reasons, and included a Fox reporter in a briefing with the same Treasury official. “This White House has demonstrated our willingness to exclude Fox News from newsmaking interviews, but yesterday we did not,” said White House spokesman Josh Earnest at the time. The Obama White House did not restrict news organization access to daily briefings by the Press Secretary.

In recent weeks, Trump has made more pointed attacks on news organizations he says have been unfair to him. “A few days ago I called the fake news the enemy of the people. And they are. They are the enemy of the people,” he said Friday, in an address to the Conservative Political Action Conference in Maryland. “Because they have no sources, they just make ’em up when there are none. I saw one story recently where they said, ‘Nine people have confirmed.'” They’re no nine people.”

The President did not identify the story he was describing. A Washington Post story, dated Feb. 9, reported that nine current and former officials had spoken to the newspaper for a report disclosing that then-National Security Adviser Michael Flynn had been misleading about the content of his conversations with Russian officials after the November election.

Days later, President Trump accepted Flynn’s resignation. Spicer said the resignation had resulted from “an eroding level of trust” between Flynn and Trump. 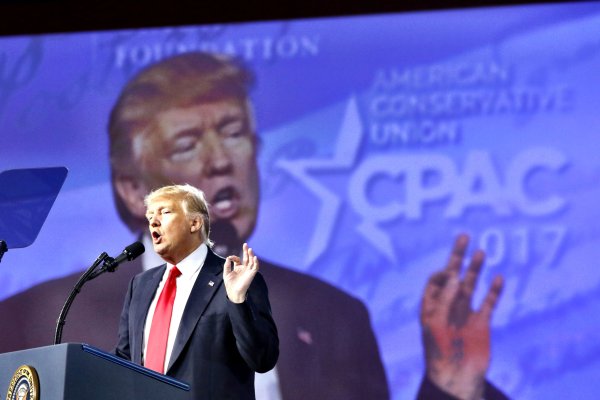 'The Enemy of the People'
Next Up: Editor's Pick