U.S. President Donald Trump is interviewed by Reuters in the Oval Office at the White House in Washington, U.S., February 23, 2017.
Jonathan Ernst—REUTERS
By Sam Frizell

Several speakers at an annual grassroots gathering outside Washington, D.C., had just finished defining what makes a true conservative when white nationalist Richard Spencer showed up.

Like an unwanted guest bursting through the front door, Spencer, who has called for “peaceful ethnic cleansing,” gathered reporters in the hallways of the Conservative Political Action Conference in the Gaylord National Harbor Hotel and announced that he was the true conservative.

“I’m not a conservative in the way they would define conservative,” said Spencer, who has cheered Trump’s rise as a coming-out for white nationalists. “I’m conservative in a deep sense — in the sense that I care about my people and maintaining a culture.”

Fifteen feet down the hallway, Matt Schlapp, chairman of the American Conservative Union, which runs the annual conference of grassroots conservatives, watched Spencer hog the limelight with resignation.

“There’s all kinds of people, I suppose, who can buy tickets,” Schlapp said, when asked why a white nationalist was allowed in.

A few minutes later, Schlapp appeared to change his mind and asked security guards to kick Spencer out.

The back-and-forth over who was allowed in to the hotel was symbolic of the questions roiling the right in the age of President Trump: Who is a real conservative? Which stances define conservatism, and which ones are optional? Who is allowed in the big tent?

It was reminiscent of the furor over Milo Yiannopoulos earlier this week, another alt-right provocateur and Trump supporter who has denounced feminism as “a cancer” and Islam as “sinister.” He was originally invited to deliver a headlining speech at CPAC, but when a video showing him endorsing sex with underage boys was made public, Schlapp disinvited him.

But while Yiannopoulos and Spencer were kept outside, those invited on stage sent competing messages about conservatism.

On Thursday morning, American Conservative Union Executive Director Dan Schneider attempted to cast out the alt right from the right entirely, calling it a “hate-filled left-wing fascist group” that is racist and sexist and, perhaps most critically for the crowd he was addressing, wants big government.

A few hours later on the same stage, Trump advisor Steve Bannon, who once boasted that his website Breitbart was the “platform for the alt right,” took to the stage with White House Chief of Staff Reince Priebus, the former head of the Republican National Committee and the quintessential Establishment Republican. The joint interview began with an awkward joke about a counter-event opposite CPAC Bannon once organized called the Uninvited.

“Here’s what we decided to do at CPAC with the uninvited,” said Schlapp, who conducted the interview. “We decided to say that everybody’s a part of our conservative family.”

In a sense, there was something familiar about this bundle of contradictions. Past CPACs have found hard-core libertarians side by side with family values traditionalists and foreign policy hawks. But the first gathering of the Trump Administration was more contradictory than most.

In large part that is due to President Trump, who will be addressing the conference on Friday. On the campaign trail, Trump said that he opposed spending cuts on major government programs like Medicare and Social Security and wholeheartedly rejected the free-trade mantra that has guided market-oriented conservatives for decades.

“I don’t think he’s the future of the conservative movement,” said Matt Batzel, a regular attendee and the national executive director of American Majority Action, a conservative organizing group. “What I think Republicans should do is bring in the Trump Democrats, have a big tent, and form a new coalition that embraces Trump populism but is fundamentally still conservative.”

But balancing populism and conservatism can be a difficult line to walk, as the Bannon-Priebus interview showed.

Trump was not always a star here. In the middle of the Republican primary last year with Trump leading the pack, the soon-to-be Republican nominee won just 15% of the vote in the meeting’s straw poll of contestants.

In past years, CPAC has been kinder to libertarians like Kentucky Sen. Rand Paul or constitutionalists like Texas Sen. Ted Cruz or local heroes like the union-busting Wisconsin Gov. Scott Walker. The Tea Party movement found its home here, symbolized in Revolutionary-style tricorn hats and Don’t Tread on Me banners.

But this year those props were replaced by Make America Great Again hats and Trump-Pence pins. Even Cruz, who as recently as last year questioned whether Trump was a “real conservative” and lambasted him for having “New York values,” signed at least one red hat during his visit.

Many attendees at CPAC said they would not define Trump as a true conservative, but that his Cabinet of conservatives and his rollback of certain regulations in the first month of his presidency were welcome.

“We can’t sacrifice our principles just because we’re happy a Republican was elected president,” said Robert Heckman, a political consultant from Alexandria. “Trump is an opportunist. But he’s doing conservative things and that’s fine.”

“You’re not quite sure which way he’s going to lean on some of the subjects,” said Janet Chesser, an attendee from Jacksonville, Florida, who preferred Cruz in the primary. “I can’t say he’s a true, true conservative. But I’ll just have to trust in what he does and if I don’t like it I will speak up.” 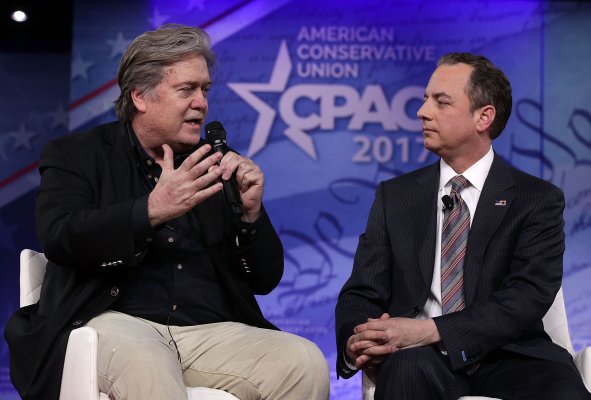