From waist trainers to “flat tummy tea,” the Kardashians have used several questionable methods to slim down. Here’s another one to add to the list: Kim Kardashian West working out in a plastic trash bag-like suit to sweat away the rest of her baby weight.

The reality star wore the strange getup during a workout with trainer Donamatrix on Tuesday morning. “I’m wearing a full sweat suit ’cause I gotta lose this extra, like, 7 pounds,” she told her Snapchat followers. Kardashian West gave birth to her son, Saint, 16 months ago, and said in October that she’d dropped almost 70 pounds. She now says on Snapchat that losing 7 pounds will bring her down to her 115-pound goal.

Kardashian West isn’t the only member of her family who’s been spotted wearing a so-called “sauna suit.” Khloe Kardashian has worn one as well. “I like wearing the sauna suit during cardio, but you burn more calories and break a sweat faster even if you’re lifting weights,” she said on her app.

To see if there’s merit behind this Kardashian-approved weight loss trick, we reached out to Tom Holland, an exercise physiologist and author of Beat the Gym. The answer: a hard no.

“This is so old school and so horrible,” Holland tells Health. This method provides no long-term weight loss results, he says, and will only help Kardashian West drop water weight.

The sauna suit trick was widely used in the 1950s, says Holland, when boxers and wrestlers needed to weigh in for their sport and had to ensure they made a certain weight class. After weighing in and re-hydrating, these athletes would immediately gain the lost weight back, in a matter of a few hours.

“If all you care about is the number on the scale, then sure, this method will temporarily change that,” Holland says. “But you’re also putting on a suit that doesn’t breathe so it’s potentially dangerous and the worst case scenario is death.” Wearing a sauna suit mimics the effects of heat stroke because it depletes your hydration and electrolyte levels and raises your core temperature and heart rate to scary new levels. Organ failure is possible as well if you use the suit for too long.

Holland says that women who want to slim down should steer clear sweat suits and other fast fixes. Instead, high intensity interval training (HIIT) is the most effective way to drop pounds quickly. “With HIIT, you’re going to burn abdominal fat, which is the last few pounds of a weight loss goal for many people,” he says. “Plus, you can potentially continue to burn calories after the workout with HIIT.”

It’s important to remember that the number on the scale is an arbitrary measurement. Losing 7 pounds may be important to Kardashian West, but she looks just as great in her body-hugging dresses at her current weight. Holland says it best: “Body composition is more important than the number on the scale. Your body will find the way it’s supposed to look. You may need to weigh a little more, but you’ll be strong and healthy.” 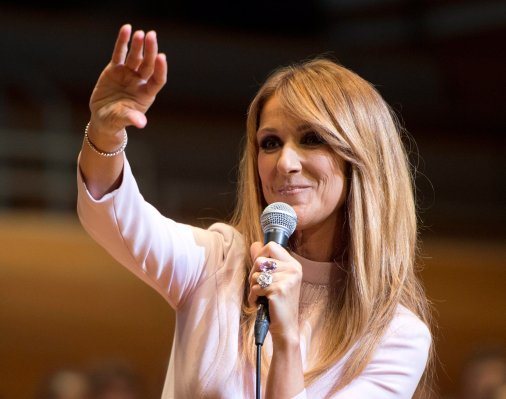 Celine Dion Has Some Advice for Beyoncé About Raising Twins
Next Up: Editor's Pick