Reporters attempt to pose questions to President Donald Trump during a news conference announcing Alexander Acosta as the new Labor Secretary nominee in the East Room at the White House in Washington, on Feb. 16, 2017.
Mario Tama—Getty Images
By Melissa Chan

President Donald Trump accused reporters of being “dishonest” and said the media is “out of control” at a lengthy press conference yesterday. He also said his Administration was a “fine-tuned machine” and received flak on the Internet after he asked a black reporter if the members of the Congressional Black Caucus were “friends of yours.”

Tony Blair, the former British prime minister, is on a mission to keep the U.K. in the European Union. In a new speech, he urged those who voted to remain in the bloc to “rise up in defense of what we believe.”

Trump tapped Alexander Acosta to lead the Labor Department after his first nominee for the position, Andrew Puzder, withdrew his nomination. Acosta, dean of the Florida International University law school, would be the first Hispanic in Trump’s Cabinet if confirmed.

Monopoly thimble is voted out of game

Hasbro said it will ditch the classic thimble game piece in the next version of Monopoly. The toy and game company said the thimble received among the least amount of support during a public vote it held last month.

A California man has pleaded guilty for his involvement in the San Bernardino mass shooting.

YouTube star PewDiePie said he was “sorry for the words” he used in videos that were widely deemed anti-Semitic.

The wage gap exists even among graduates of top universities, a new study has found.

NASA is eyeing a return to the moon.

American Horror Story will tackle the 2016 presidential election next season. 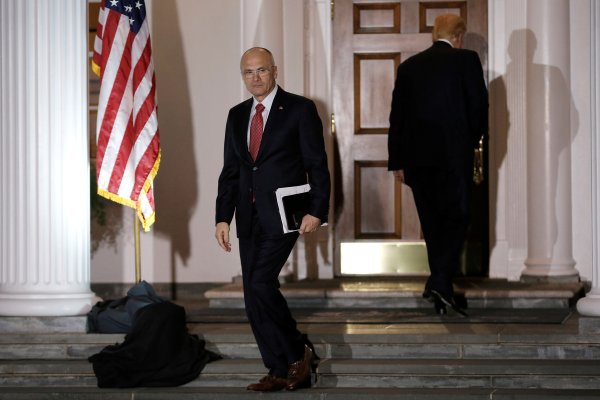