Senior aides to President Trump denounced reports of personal friction in the upper ranks of the West Wing Wednesday, displaying a united front in a meeting with TIME in the Cabinet Room.

Stephen Bannon and a senior aide to Vice President Mike Pence, Josh Pitcock, offered particular praise for White House chief of staff Reince Priebus, who has been targeted by criticism in the conservative press suggesting his job might be on the line. “This guy is doing an amazing job,” Bannon told TIME about Priebus. “I’m proud to call him a partner.”

The endorsement came after a story in Breitbart, the conservative outlet previously led by Bannon, suggested that Priebus may be replaced in his job, based on anonymous sources who were not identified as working in the White House. Bannon claimed suggestions that the White House was wracked by disorder were evidence that the news media is behaving like an “opposition party” to President Trump. “It’s not chaos,” said Bannon about the mood in the White House. “It’s anti-chaos.”

Other administration officials have blamed the reports of division on West Wing outsiders like Roger Stone, the former Trump political operative, who is currently promoting a book about the Trump campaign. Stone, who was not named in the Brietbart story, has been outspoken in his calls for Priebus to step down.

The comments came after the West Wing endured another tumultuous week, amid the continued fallout from the dismissal of National Security Advisor Mike Flynn, continued messaging miscues and several damaging stories in the press based on leaks from current and former government officials.

Speaking to TIME in the Cabinet Room, Priebus and Bannon said reports of personal drama couldn’t be further from the truth. They described themselves and senior Trump aide Jared Kushner as an effective team. Bannon and Priebus acknowledged that they sometimes don’t see eye-to-eye on the pace of implementing Trump’s agenda. But they described such disagreement as a strength. Bannon, who has been outspoken in calling for swifter change, said Priebus’ relative caution is an effective counterbalance. “The reason knives are out for him is because of the great job he’s doing,” Bannon said Priebus.

The two of them spend large portions of their day in Priebus’ office, Priebus said, when not together in the Oval Office with Trump. “We’ve been working together since August ’16,” Bannon said of the day he joined the Trump campaign, adding he knew almost immediately he needed Priebus to help Trump win the election and to form a government. The need increased after Nov. 8 and the campaign team realized the transition—then run by Chris Christie—wasn’t ready for primetime. “It was a disaster,” Bannon said.

The proof of their working relationship, Bannon argued, was the swiftness with which Trump has acted after coming into office, including a slew of executive orders that have reversed government policy and fulfilled Trump campaign promises. “Compare our record to anyone else’s records,” Bannon said. 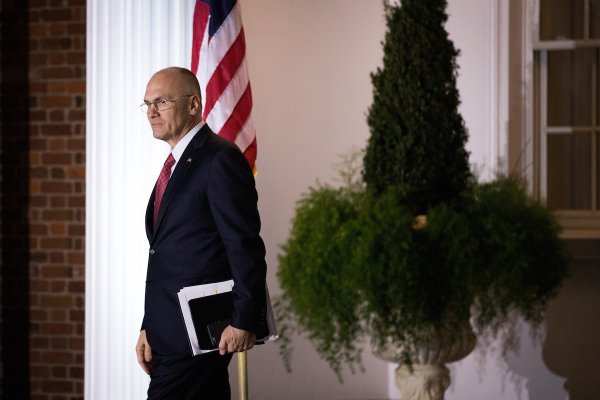 Trump's Labor Pick Withdraws From Nomination
Next Up: Editor's Pick