Embattled National Security Advisor Mike Flynn is the subject of an “evaluation” from President Trump, the White House said Monday, after a tumultuous 96 hours has left his job security in doubt.

Flynn’s job is on the line after he apparently misled Vice President Mike Pence about the extent of his conversation with Russian Ambassador Sergey Kislyak during the presidential transition. Pence relied on Flynn’s denial that he had discussed U.S. sanctions on Russia with Kislyak—an assertion that Pence repeated to the press and which now appears to be false.

“The president is evaluating the situation,” White House Press Secretary Sean Spicer said in a statement to reporters. “He’s speaking to Vice President Pence relative to the conversation the Vice President had with Gen. Flynn and also speaking to various other people about what he considers the single most important subject their is: our national security.”

The controversy comes after Flynn walked back his previous denials about discussing Russian sanctions Friday, saying he couldn’t be 100% certain that there was no discussion of sanctions on the call. On Thursday, the Washington Post reported that federal officials are reviewing records of Flynn’s contacts with Kislyak, and that U.S. intercepts left little doubt that sanctions came up on at least one call.

On Friday, Flynn tried to damage control within the West Wing. Flynn met once with Pence and other top aides and spoke with the Vice President again by phone by phone. Officials said that Flynn apologized to Pence. A spokesperson for Pence did not immediately respond whether Pence has accepted the apology.

News of Trump’s evaluation of Flynn capped a day of mixed signals on his status from the White House Monday. Anonymous officials began the day suggesting Flynn’s time in the West Wing is numbered. Other aides pushed back—also anonymously. When Trump and Canadian Prime Minister Justin Trudeau held a joint press conference at 2p.m. Flynn was seated prominently in the first row, between senior advisors Stephen Miller and Jared Kushner.

“The simple question is, does the president still have confidence in his National Security Advisor,” one television reporter said loudly in earshot of Flynn and other senior aides before the news conference began. But the question did not come up during the formal part of the event, and Trump ignored shouted questions on the subject from the media.

By 4 p.m., White House Counselor Kellyanne told MSNBC that, “ Yes, General Flynn does enjoy the full confidence of the president.” Minutes later she repeated the same to reporters inside the West Wing.

But barely an hour later President Donald Trump was striking a different tone. After a meeting with Spicer and White House Chief of Staff Reince Priebus, Trump directed reporters to Spicer’s comments. “Just put out a statement,” he said as he returned to the White House residence. Spicer cast his statement as reflecting Trump’s “most current thinking” and referred reporters to Conway on whether she had discussed Flynn’s situation with the president Monday.

“This is what he asked me to communicate to you,” Spicer told reporters, saying his phrasing represented the president’s thinking. After Spicer released his statement, he huddled briefly with top aides to the Vice President, followed by a conversation with Conway.

Spicer suggested Trump would find it inappropriate if Flynn had discussed sanctions on the call. “Again, that’s why he’s saying he’s evaluating it,” Spicer said of Trump.

Flynn’s contacts potentially ran afoul of U.S. law regarding interference in foreign diplomacy. That statute has never been prosecuted, and Flynn’s role in the transition would complicate any such effort. The more pressing issue, aides say, is the erosion of trust in Flynn within the West Wing—particularly among the Vice President and his team.

But the latest controversy is far from his first error, aides said. Trump was frustrated after Flynn failed to adequately brief him on an executive action that reformed the National Security Council that also placed chief strategist Steve Bannon on the powerful Principals Committee. Career officials at the NSC are up in arms trying to adapt to the new administration and Flynn’s leadership. The former Director of the Defense Intelligence Agency was dismissed by the Obama administration over his management style.

Spicer maintained that Flynn was still carrying out all of his duties as National Security Advisor while the review is in progress, and that he has been involved in the planning and execution of the president’s meetings with three foreign leaders this week.

It was unclear how long Trump’s review of Flynn’s position would last, leaving the senior staffer on the hot seat for an undetermined time.

“I don’t have an update,” Spicer said. “This is the president looking at the situation. If he has an update, whether tomorrow or next week, he’ll let me know and I’ll let you know.” 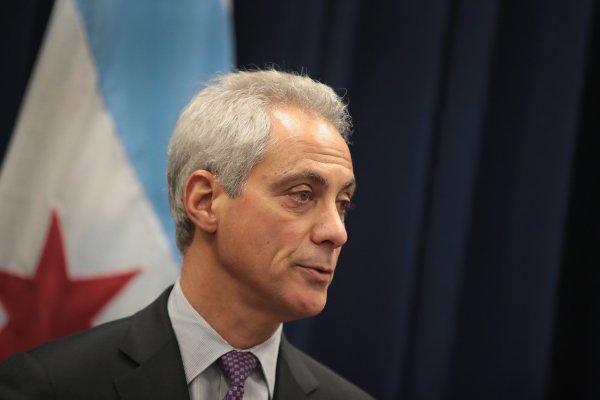