The 10 Worst Foods For Your Heart

Want to keep your heart and cardiovascular system healthy for years to come? Keep these meals and snack items away from your cart and out of your regular diet. Save them for occasional indulgences—at most—and replace them with heart-healthy swaps whenever possible.

Fast-food burgers
The science on whether saturated fats are truly linked to heart disease isn’t entirely clear. When consumed in moderation, high-quality, grass-fed beef may even have some heart-health benefits, says Dr. Regina Druz, associate professor of cardiology at Hofstra University and chief of cardiology at St. John Episcopal Hospital in New York City.

But in general, Druz says, “saturated fats from animals, especially when combined with carbohydrates, appear to have a deleterious effect on heart health.” Avoiding fast-food restaurants, which tend to use lower quality ingredients and unhealthy cooking methods, is always a smart way to cut back, she says.

Processed and cured meats
Cold cuts and cured meats (like bacon and sausage) can be high in saturated fat. But even low-fat options tend to be very high in salt. Just six thin slices of deli meat can contain half the daily recommended level of sodium, according to the American Heart Association.

“The majority of people should be on a salt-restricted diet because of sodium’s link to high blood pressure,” says Dr. Laxmi Mehta, director of the Woman’s Cardiovascular Health Program at the Ohio State University Wexner Medical Center. Not everyone needs medication to make big strides, she says. “Sometimes my patients with elevated blood pressure are able to make significant improvements just by adjusting their diet.”

Deep-fried foods
Several studies have linked the consumption of fried foods, like French fries, fried chicken and fried snacks, to an increased risk of heart disease. Conventional frying methods create trans fats, a type of fat shown to raise the bad type of cholesterol and lower the good kind.

“If you’re making a veggie stir-fry at home and you’re preparing it with olive oil and coconut oil, there’s certainly nothing wrong with that,” says Druz. “But what most people understand as typical fried food, the kinds you don’t prepare at home, should certainly be avoided.”

Candy
For many years, fat was branded as the biggest dietary cause of heart disease. But a report published last year in JAMA Internal Medicine revealed that studies funded by the sugar industry were largely responsible for pushing that belief. Now, experts say that diets high in added sugar may be just as big a threat by contributing to obesity, inflammation, high cholesterol and diabetes, all of which are risk factors for heart disease.

“The debate in cardiology has pivoted from saturated fat and cholesterol to sugar,” says Druz. “If there is one ingredient I would say anyone with heart disease or risk for heart disease must avoid, it’s added sugar in any form.”

Soft drinks and sugar-sweetened juices
For many Americans, the largest source of added sugar in their diets isn’t from food, but from beverages. Recent government reports found that more than 60% of children, 54% of adult men, and 45% of adult women had at least one soda or sugar-sweetened drink a day between 2011 and 2014.

Sugary cereals
Even foods that seem like part of a balanced diet, like breakfast cereals, can be loaded with sugar. “Eating refined carbohydrates and sugars in the morning is going to produce inflammation and make blood sugar go up and down, so you’ll crave more sugar throughout the day,” Druz says. Instead, she recommends having fruit along with an egg or avocado on whole-wheat toast.

Cookies and pastries
Most baked goods—especially those that are commercially produced—are full of sugar and are likely made with saturated fats (like butter or palm oil) or trans fats (like partially hydrogenated vegetable oil). “You have two ingredients that work with each other to give somebody the worst possible nutritional profile,” Druz says.

Margarine
There may be room for debate about the cardiovascular risks associated with saturated fats, like butter. What’s more certain is that diets high in trans fats appear to definitely raise a person’s risk of heart disease.

Trans fats are common in sticks of margarine that are solid at room temperature, which are often marketed as a healthier alternative to butter. To be safe, choose a soft, spreadable margarine that contains no partially hydrogenated oils, or stick with olive oil instead.

Meat-lovers pizza
After cold cuts and cured meats, pizza ranks second on the American Heart Association’s list of “salty six” foods. (Other salt bombs to watch for include soups, condiments, and salad dressings.) Pizza’s sodium content—as well as its saturated fat—goes way up as you pile on extra cheese and meat-based toppings. When eating out or getting delivery, limit yourself to one or two slices, and opt for veggie toppings instead.

Diet soda
It may be fat-free and zero-calorie, but diet soda has a dark side. “People are under the impression that they’re healthy, and they’re really not,” says Druz. Research continues to mount linking the cola to the development of heart-disease risk factors like obesity and diabetes.

Some studies show that people who drink diet sodas tend to overcompensate and consume more calories than they otherwise would, while other research suggests that chemicals in diet soda may actually alter gastrointestinal bacteria and make people more prone to gaining weight. “While it may have no sugar, it’s not a heart-healthy choice,” says Druz. 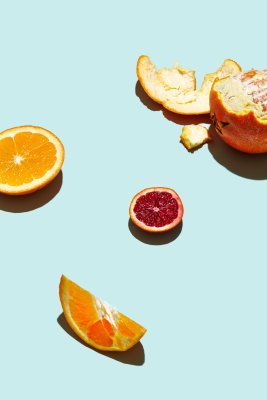 9 Reasons You Should Be Eating More Citrus
Next Up: Editor's Pick