Days after Donald Trump’s election, Japanese Prime Minister Shinzo Abe flew to New York for a hastily scheduled meeting with the then-President-elect. For 90 minutes they sat in Trump’s triplex atop his eponymous tower—the first head of government with the determination and the mettle to earn an audience with the mercurial new American leader.

The unconventional meeting reflected the unconventional times. Trump had threatened during the campaign to dramatically cut U.S. military assistance to Japan—and even force it to develop its own nuclear weapons as a deterrent to North Korean aggression.

Meanwhile, Trump’s protectionist talk on trade stood to tank Japan’s economy, and his withdrawal from the Trans-Pacific Partnership stood to provide a boost to China in the region. Abe needed to develop a personal relationship with the new president—and fast. After all, Japan is no ordinary partner. The U.S. literally wrote its constitution, restricting its military for decades, and economic and military ties run deep.

At the time, Trump transition officials said the incoming president, who was looking to prove himself on the international stage, welcomed Abe’s eagerness. His daughter, Ivanka, was also present, simultaneously working to seal a deal to license her clothing line in Japan. Abe presented Trump with a $3,800 gold-inlayed driver.

For Abe, all the effort appeared to largely pay off.

On Friday, he became the second world leader to meet with Trump at the White House. Even before a joint communiqué from the two governments revealed the policy agreements between the two leaders, Abe had already succeeded in his key goal for the visit: demonstrating a friendship with Trump. As the limousine pulled up to the doors of the West Wing, Trump was there waiting.

“I shook hands but I grabbed him and hugged him because that’s the way we feel,” Trump later said. “We have a very, very good bond, very, very good chemistry.” Sitting in the Oval Office the pair posed awkwardly for photos. “Strong hands,” Trump said of Abe, and motioned a golf swing to reporters.

As they stood in the East Room an hour later taking questions, Abe effusively praised Trump, who in their private meeting had reaffirmed the U.S. would join Japan in defense of the Senkaku Islands, which are also claimed by China.

“With President Trump taking on the leadership, I’m sure there will be major scale infrastructure investments will be made, including the high-speed train,” Abe said, promoting his country’s high speed rail technology. “With the latest magnetic technology from Washington, D.C., up to New York where Trump Tower exists, only one hour would it take if you ride the MagLev train from Washington, D.C., to New York.”

“Japan, with our high level of technical capability, we will be able to contribute to President Trump’s growth strategy,” Abe added, touting how his own agenda could contribute to Trump’s. “There will be even more new jobs being born in the United States.”

As Abe was laying it on thick, Trump nodded and made the occasional gesture in Abe’s direction, but was apparently not wearing the earpiece providing simultaneous translation from Japanese.

But the joint statement between the two countries provided not only assurances for defense cooperation, but a new bilateral economic dialogue led by Vice President Mike Pence and Deputy Prime Minister Tarō Asō.

This weekend, Abe and his wife will be a guest of the President and First Lady at his Mar-a-Lago Club in Palm Beach, where a round of golf is on the agenda. It was Abe, officials said, who floated the notion of a golf outing to Trump during their Trump Tower meeting, suggesting that it could echo a similar round played between President Dwight Eisenhower and Abe’s grandfather, then-Prime Minister Nobusuke Kishi.

“I am looking forward for our weekend in Florida with Donald,” Abe said. “My scores in golf is not up to the level of Donald at all,” he added, before referencing a fitting golf maxim suggesting that overreaching to achieve a goal is preferential to caution. “My policy is never up, never in, always aiming for the cup.” 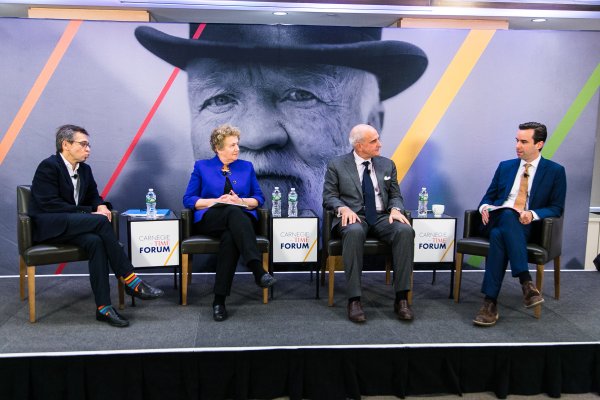 Populism Has 'The Upper Hand': Panelists Discuss Global Transformation Under President Trump
Next Up: Editor's Pick