President Trump Said He Wants to Deport Criminals. This Arizona Woman's Crime Was Getting a Job

The 35-year-old Arizona woman, who first came to the United States at age 14 and has two children who are U.S. citizens, was returned to Mexico on Thursday. Her crime? Using a fraudulent Social Security number to get a job at a Phoenix-area waterpark in 2008.

Under the Obama Administration, Garcia de Rayos was not considered a high priority for deportation. In Arizona, criminal impersonation is a class 6 felony, the lowest level of felony in the state, and though an immigration court ordered her deported in 2013, officials had let Garcia de Rayos stay in the country until now.

News of her scheduled deportation spread like wildfire, largely because she seemed the opposite of the undocumented immigrants Trump had pledged to focus on—”people that are criminal and have criminal records, gang members, drug dealers,” as he told 60 Minutes in November.

Activists staged protests and attempted to block a van carrying Garcia de Rayos away from the Immigration and Customs Enforcement building. Now, immigration advocates say their concern is that Garcia de Rayos was just one of many similar deportations to come.

On Jan. 25, Trump issued two executive orders aimed at meeting campaign promises he’d made on immigration. While the orders make clear that Trump will prioritize the deportation of criminals, the order on “Enhancing Public Safety in the Interior of the United States” greatly expands what the federal government considers a crime worthy of a speedy deportation. Among them: being convicted or charged of any criminal offense, using a fake Social Security number, not leaving after final removal orders and posing a threat to public safety or national security in the eyes of an immigration officer. Under the order, even committing an act that could lead to a criminal charge would make an immigrant a priority for deportation.

Cleveland immigration attorney David Leopold says the sweeping nature of the order provides the blueprint for the mass deportations Trump promised on the campaign trail. “It’s insidious,” he says. “Almost any infraction could lead to deportation. It’s not limited.”

Guadalupe Garcia de Rayos is locked in a van that is stopped by protesters outside the Immigration and Customs Enforcement facility in Phoenix on Feb. 8, 2017.
Rob Schumacher—The Arizona Republic/AP

Andre Segura, an attorney with the American Civil Liberties Union Immigrants’ Rights Project says instances like the one in Phoenix had been their concern since the orders were released.

“A priority is not just what President Trump came out to say was the most serious criminals, that was more along the lines of what President Obama was attempting to do,” he says. “This pretty much incorporates everyone.”

There are 11 million undocumented immigrants living in the U.S. today and while it’s unclear exactly how many will be affected by the order, there are already clear signs that large swaths of the community at risk. Karen Tumlin of the National Immigration Law Center said Friday that law enforcement officials have already carried out raids on homes, communities and workplaces in Los Angeles and Georgia. The raids themselves are not new, but advocates say there are sign that are are being carried out on a larger scale.

Advocates have already begun fielding questions from immigrant communities about what the orders mean for them and the sense of fear within those communities is palpable. Lynn Tramonte, the Deputy Director of America’s Voice Education Fund, said on a conference call Friday that she’d met with immigrant mothers and all asked for guidance on how to keep their children safe in case they are deported.

“These are real people with real lives and we’re just tearing them apart,” she said.

Immigrants are being urged to get in contact with community organizations and attorneys in order to protect themselves. And organizations like the ACLU are providing tips and resources on what to do if ICE agents come knocking translated in several languages.

After Garcia de Rayos was deported, her two children drove to Mexico to reunite with her. In a news conference on Thursday, Garcia de Rayos said she does not have any regrets about attending the ICE meeting that led to her deportation.

“I don’t regret it, because I know I did this so that more families could see what’s in store, what could happen, and so that they could know what they could risk,”she said. “I am not what [Trump] says. I simply am a mother who fights for her children, who fights to give them the best.” 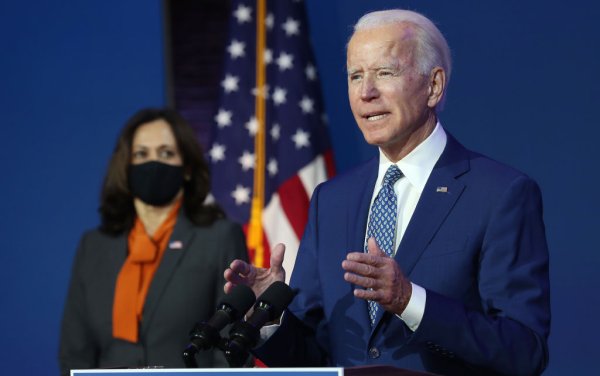 What a Biden Administration Means for U.S. Immigration Policy
Next Up: Editor's Pick